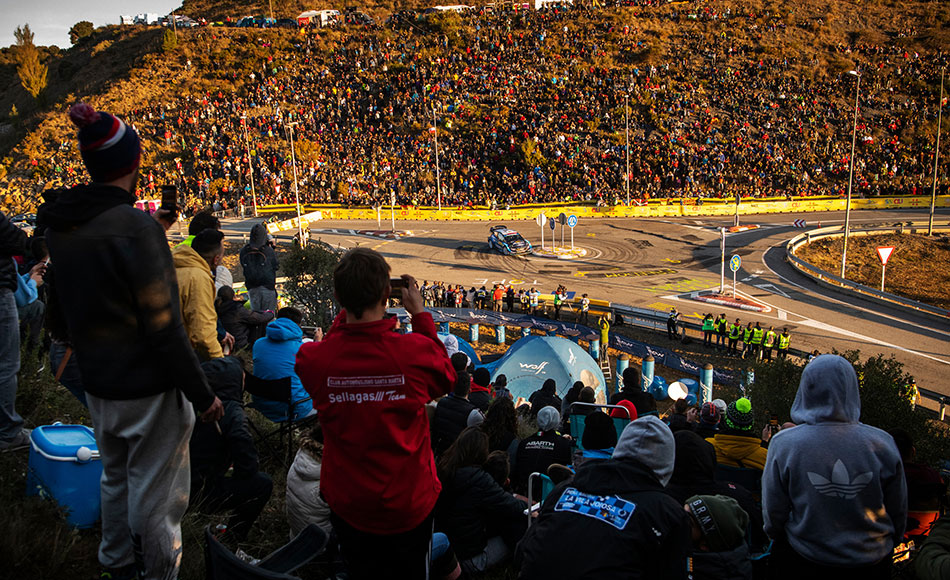 It’s time for the penultimate round of the 2021 WRC season. A weekend where Sébastien Ogier can seal his eighth WRC title.

To put things simply, Ogier needs to outscore Evans by six points in order to be crowned champion on Sunday. Evans is currently 24 points behind Ogier and could in fact lead the championship at the end of the weekend. Ogier would seal the championship when he outscores Evans with six points as he has won four rallies this season versus Evans’ two, meaning that he would win the tiebreak.

Rally Spain switches to a 100% tarmac event following a rule change which bans mixed surface rallies. The rally was last run as a full tarmac event in 2009.

Thursday’s Shakedown is the first bit of action on the smooth tarmac roads. Coll de la Teixeta (4.31 km) is this year’s shakedown. It’s an old stage which was last run back in 2011. The shakedown stage is actually the start of the Sunday’s Riudecanyes Power Stage. Coll de la Teixeta shakedown ends just after the famous roundabout (picture above).

RallyRACC Catalunya 2021 consits of 17 stages in total. Six stages on Friday, seven stages on Saturday and four stages on Sunday.

Friday’s starts with Vilaplana. It’s effectively the reversed version of La Mussara from 2019. After Vilaplana, the crews head to a new stage: La Granadella. Riba-roja is the final stage of the loop. The stage was last run in 2012 but is actually a very commonly known road. Riba-roja is effectively the tarmac section of the famous mixed-surface Terra Alta stage from 2010 to 2019. A very twisty stages with a lot a elevation change. The Vilaplana-La Granadella-Riba roja loop is run twice.

Saturday’s opener is Savallà, an unchanged stage which was introduced back in 2017. Querol – Les Pobles follows next and is an update configuration of 2019’s Querol. The first 1.5 km’s of the stage is new and then flows to a known part from the previous configuration. However, in the town of Querol, the route moves to the left towards a never used concrete road. The final five kilometers of the test are again on smooth tarmac. The loop ends with El Montmell. It’s a known stage which is unchanged since 2017 and the longest stage of the rally. Savallà, Querol – Les Pobles and El Montmell are all run twice. The day ends with the the Salou super special on the beach boulevard of the host city (picture below).

Sunday consists of two different stages which are both run twice. Santa Marina is back after not being included in 2019’s route in either of it’s configurations as Santa Marina, Pratdip or Colldejou. The stage is shorter than normal as it starts after the town of Pratdip instead of before the town. Riudecanyes is the Power Stage this weekend. As said above, it starts with Thurday’s shakedown and includes the famous roundabout. This years configuration of the stage is unchanged compared to 2019.

A total of 11 WRC-cars are entered for the rally. Toyota (Ogier-Evans-Rovanperä-Katsuta), Hyundai (Tänak-Neuville-Sordo) and M-Sport (Greensmith-Fourmaux) all entered their expected crews. Oliver Solberg and Nil Solans are entered by Hyundai 2C Compétition. This weekend will be Solberg’s WRC-car tarmac debut on a WRC-rally. Solans replaces the injured Pierre-Louis Loubet and make his WRC-debut on his home event this weekend.

In WRC2, Teemu Suninen is a one-to-watch this weekend as he steps in a Hyundai Motorsport entered i20 Rally2 with Jari Huttunen as his team mate. Andreas Mikkelsen won’t be competing in Spain, however, his team mate Marco Bulacia is in Salou as is the current number 2 in the WRC2 standings, Mads Østberg.