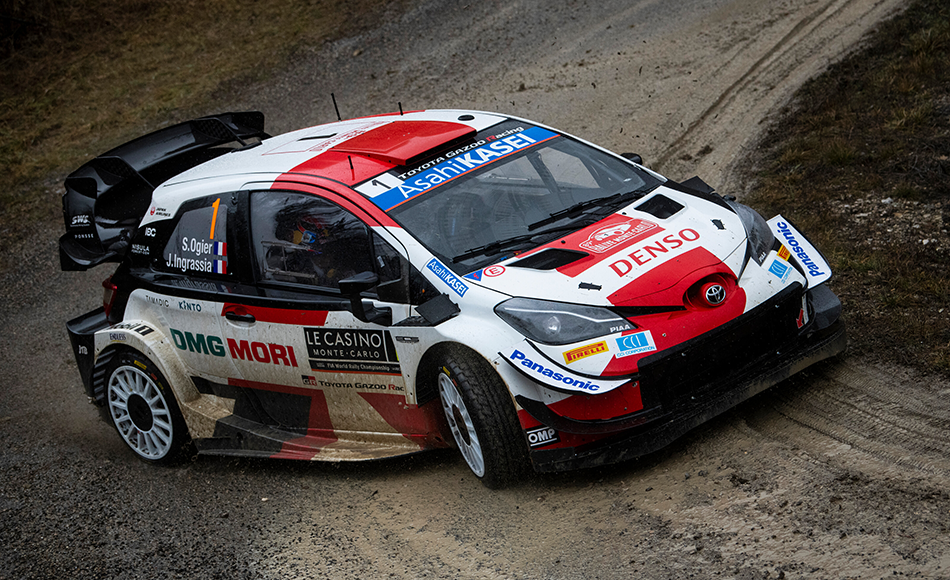 Sébastien Ogier is the leader heading to the final day of Rallye Monte Carlo tomorrow, with his Toyota team-mate Elfyn Evans 13 seconds behind him in P2.

Ogier started the day off in a dominant way by winning SS9 by 17.8 seconds over Elfyn Evans. Tänak got a puncture in SS9, which dropped him to P5 in the overalls standings. Kalle Rovanperä moved up to P3, making it a Toyota 1-2-3 after SS10. Tänak also got passed by his Hyundai team-mate Thierry Neuville for P4. The Estonian ironically said at the stage-end: “It was at the beginning. I had a spin, then at the next corner there was a loose rock inside. It’s a beautiful morning.”

In SS10, things didn’t went as straightforward for Ogier and Evans. Thierry Neuville said at SS10 stage-end that he had “a much better rhythm in the car”. That reflected on his stage-time. The Belgian won the stage by 12 seconds over Hyundai-junior Pierre-Louis Loubet. It’s a first WRC stage-win for Neuville’s co-driver Martijn Wydaeghe. Dani Sordo was P3 in the stage, 14 seconds behind Neuville. Ogier and Evans dropped respectively 42.2 and 46.1 seconds to Neuville. The ice polished for every car further down in the road order. Ogier was seemed surprised by the big time loss compared to Neuville and said: “There was no grip. I hope I don’t lose 42 seconds to Elfyn.”

Evans posted very similar split-times as Ogier, a stall at a hairpin meant that Evans completed the tricky stage 3.9 seconds slower than Ogier.

Things went from bad to worse for Tänak in SS10. The Estonian stopped twice and completed the stage with a puncture (again). Tänak made it back to service, but was forced to retire as the crew had two punctures and only 1 spare tyre. Event rules mean that Tänak and Järveoja won’t be back to tomorrow.

Takamoto Katsuta is P6 in his Toyota. Andreas Mikkelsen is still P7 in the overall standings with his Skoda Fabia Rally2 Evo. The Norwegian holds a comfortable lead in the WRC2 classification of 2 minutes and 13 seconds over Adrien Fourmaux, who is ninth overall. One place ahead of Fourmaux in the overall standings is Gus Greensmith. Eric Camilli rounds off the top 10 in his Citroën C3 Rally2.

An almost 4-hour long road section brings the crews to Monaco this evening for Parc Fermé. There won’t be a service in Monte Carlo tonight or tomorrow morning, with only a Tyre Fitting Zone in to start the day.

The final day of the Rallye Monte Carlo Carlo consists of 4 stages in the mountains near Monaco. Stage 12 get underway at 8:30 local time, with the Power Stage to start at 12:18.