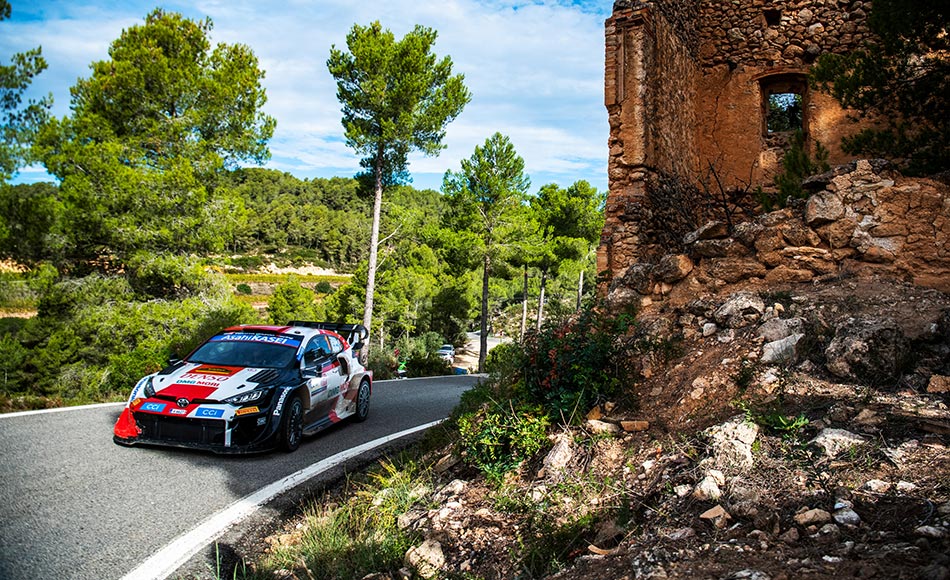 Sébastien Ogier is on course for his first hybrid-powered win of his career as he leads RallyRACC Spain by 20.7 seconds heading into the final day.

Ogier was virtually untouchable and won four out of seven flowing asphalt speed tests in the Costa Daurada hills to turn a slender 4.8sec overnight lead into a 20.7sec advantage over Thierry Neuville with one day remaining of this penultimate round.

“It’s been a very enjoyable day for us,” said Ogier. “We had good fun in the car and the times were following. That’s always what you dream for when you come to a rally.

“Honestly, I have been happy with my season so far but of course it would be nice to clinch a win. Now we are in a good position but there is still a long way to go.”

Neuville moved into the runner-up spot at the final hour – pinching the position from 2022 champion Kalle Rovanperä, who dropped a chunk of time when he selected the wrong engine map on the start line of El Montmell. At close of play just 1.4sec separated the pair.

It was a generally frustrating day for Neuville, however, as he fought to optimise the set-up of his i20 N. Despite continuously making tweaks to the car he could not find the perfect balance between understeer and the rear-end breaking free.

His Estonian team-mate Ott Tänak ended 15.9sec behind. Tänak’s day was relatively drama-free and he headed fifth-placed Dani Sordo – also driving an i20 N – by 36.6sec.

Sordo’s Saturday was one of two halves. The morning was filled with frustration as he repeatedly dropped time to the leading crews. Mid-leg set-up tweaks rejuvenated the Spaniard and he even grabbed a stage win late in the afternoon.

Elfyn Evans remained a lacklustre sixth overall, 14.4sec down on Sordo. His Toyota ran without problems but, like Sordo, something was missing for the 33-year-old and he couldn’t quite put his finger on what it was.

Tyre management was the major talking point for Craig Breen, who held seventh overall in an M-Sport Ford Puma. The Irishman couldn’t gel with the set-up of the car which resulted in him overheating the front tyres on several occasions. He languished 1min 39.7sec back from the lead but pulled clear of Yaris hotshot Takamoto Katsuta.

Puma duo Adrien Fourmaux and Pierre-Louis Loubet completed the leaderboard. The latter broke into the top 10 at the expense of team-mate Gus Greensmith, who retired when he collided with an armco barrier on a right-hand bend in the final stage of the morning loop.

Yoann Bonato took the win at the ERC event of RallyRACC ahead of 2022 ERC Champion Efrén Llarena. The ERC event at RallyRACC forms the final round of the 2022 European Rally Championship season and finished after SS14.