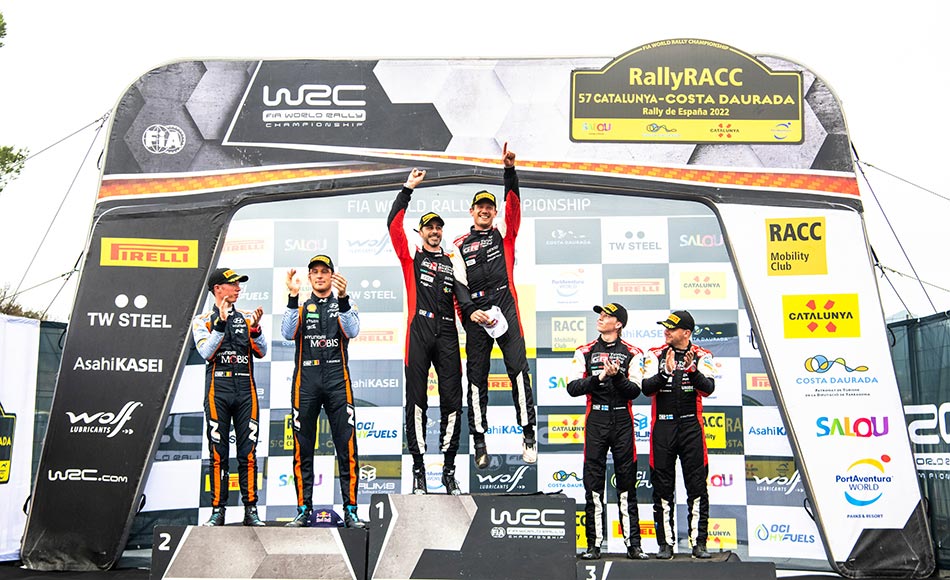 Sébastien Ogier clinched his first WRC victory with hybrid power after winning RallyRACC Spain 2022. It’s the Frenchman’s 55th career win and the first win in the WRC for his co-driver Benjamin Veillas as Toyota sealed the 2022 Manufacturers’ title after their double podium in Spain.

Ogier has been contesting a part-time campaign for Toyota this season and took control of this penultimate round when he posted a trio of fastest times across the middle of the three-day asphalt rally.

He did exactly that, clinching victory by 16.4sec from Hyundai i20 N star Thierry Neuville to mark his first triumph of the WRC’s hybrid era and win number one for co-driver Benjamin Veillas.

Kalle Rovanperä, who won the drivers’ championship earlier this month, confirmed a double podium for Toyota. His result secured the Japanese marque its second-successive manufacturers’ crown.

With one round to spare, the Jyväskylä-based squad holds an unassailable 93-point lead over Hyundai Motorsport and can no longer be caught.

“It’s Benji’s first win so I am very happy for him,” beamed Ogier. “It’s fantastic to get this win because it was an important weekend for the team.

“It’s not always easy to achieve such results and this season has been very dominant, so congratulations to Toyota Gazoo Racing.”

Toyota Gazoo Racing team principal Jari-Matti Latvala added: “It’s great to secure the title here. The last rally in Japan is the home round for Toyota so now we can be much more relaxed going there. If we can win there, we can have even bigger celebrations!”

Neuville stole the runner-up spot from Rovanperä late on Saturday afternoon and was poised for a tight scrap with the young Finn. That battle never materialised, however, as Rovanperä punctured a front left tyre when he drove over a drainage hole in the second stage. At the final control, 18.1sec split the pair.

Hyundai cars locked out the remainder of the top-five with Ott Tänak finishing 44.0sec back from the lead in fourth overall. The Estonian driver never quite found the sweet spot in terms of his car’s set-up and trailed Rovanperä by 9.5sec.

A disappointed Dani Sordo was 32.5sec further back after a mixed weekend on his home roads. He lacked pace for the first day-and-a-half until set-up tweaks at Saturday’s midpoint unlocked a sudden turn of speed.

Unfortunately those tweaks came too little too late and, despite winning a couple of the smooth Tarmac speed tests, Sordo was left to rue what could have been.

Also feeling dejected was sixth-placed Elfyn Evans. The Welshman felt he was lacking performance throughout the rally and a puncture in the same place as team-mate Rovanperä at Riudecanyes compounded his woes.

Takamoto Katsuta and Adrien Fourmaux were seventh and eighth. Both drivers gained a position at the expense of Fourmaux’s M-Sport Ford Puma colleague Craig Breen, who also had tyre dramas after hitting a hole in the morning.

The championship reaches its finale next month with an all-new asphalt event. FORUM8 Rally Japan takes place from 10 – 13 November.

WRC 2022 Manufacturers’ Championship standings after Round 12/13