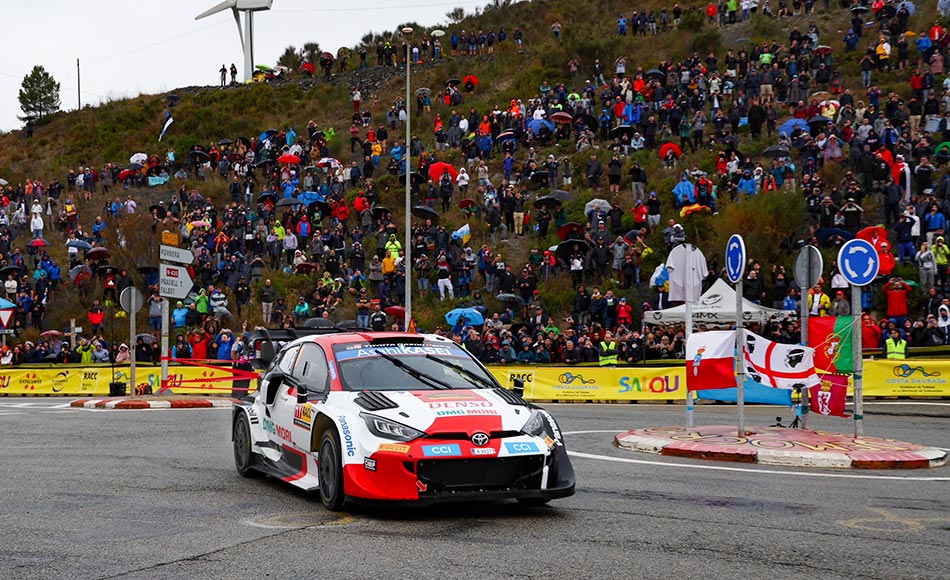 Rain showers hit the shakedown stage while the drivers were queuing up to get their first kilometres in on the smooth tarmac roads around Salou.

All four Toyota drivers; Rovanperä, Evans, Ogier and Katsuta, elected for Pirelli’s soft compound tyres while all other Rally1 crews did their first runs on the hard compound.

Ogier was the fastest with a 2:40.1, set in his third and final run of shakedown. Katsuta was 0.9s down on Ogier to slot into P2.

It looked like the Toyota’s were to cover the top four with their four cars, however, M-Sport’s Pierre-Louis Loubet switched to soft tyres late in the session to go P3, 1.2s behind Ogier’s pace.

Newly crowned WRC champion Kalle Rovanperä was fourth, two-tenths behind Loubet, followed by Elfyn Evans who was a further tenth down.

Gus Greensmith did, like Loubet, also do a late run on soft tyres and managed to go P6, 2.5s off the lead. Adrien Fourmaux returns to the WRC after being absent in Greece and New Zealand. The Frenchman was seventh fastest, followed by Pepe López who slot into P8 with his Rally2 specification Hyundai i20 N. The Spaniard pipped Craig Breen who was ninth and another home hero in Alejandro Cachón who rounded off the top 10 with the Citroën C3 Rally2.

The Hyundai’s did their mandatory three runs through shakedown quickly, driving in the least optimal conditions. All three factory Hyundai cars returned to service and didn’t do any shakedown runs later.

Ott Tänak ended shakedown in eleventh, while his teammates Dani Sordo and Thierry Neuville were thirteenth and fourteenth respectively.

The rally gets underway officially this evening with the ceremonial start at Salou’s boulevard. Tomorrow morning, the timed action starts with eight stages scheduled, totalling 118.92 kilometres against the clock.