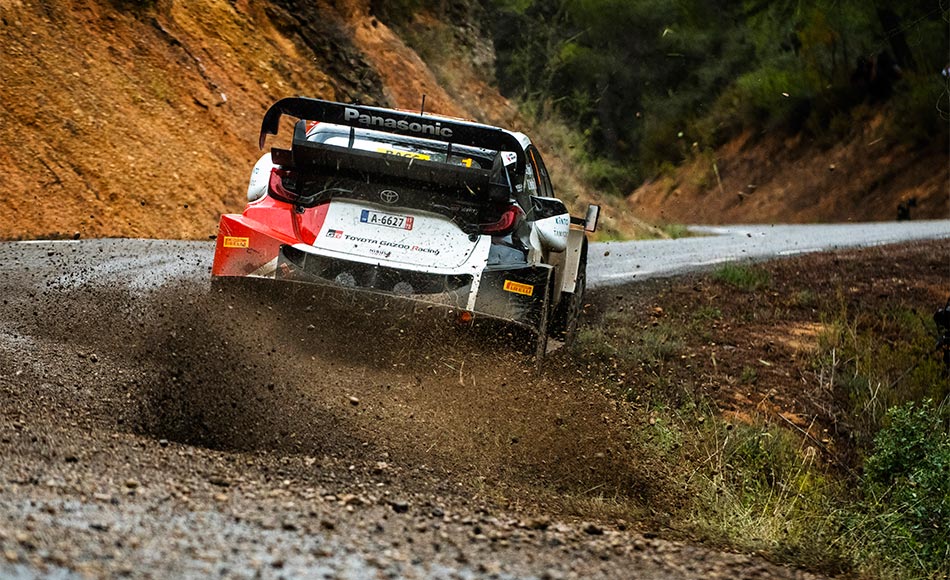 Sébastien Ogier leads RallyRACC Spain after day 1 by a slender advantage of 4.8 seconds over his team-mate Kalle Rovanperä. Hyundai’s Thierry Neuville is in third, 12.5 behind the eight-time WRC champion.

It was a case of old champion versus new champion as Ogier – an eight-time titleist between 2013 and 2021 – and Rovanperä – winner of this year’s series with two rounds to spare – traded blows across eight pulsating asphalt speed tests in the Costa Daurada hills.

Rovanperä was initially imperious and led the way after two stages. He relinquished the top spot at Les Garrigues Altes 1, however, after dropping 8.2sec to his GR Yaris partner while fighting against understeer.

Ogier surrendered his position to Hyundai Motorsport’s Thierry Neuville just before the day’s midpoint but emerged from service fighting, immediately snatching back the lead.

Coming under increasing pressure from Rovanperä, who claimed back-to-back stage wins at SS6 and SS7, the Frenchman responded in the finale – edging the 22-year-old by 1.2sec to end the day 4.8sec clear.

“It’s been a good day and I’m really happy,” reflected Ogier. “I was a bit scared to be seventh on the road today with the amount of cuts that we had to go through, but we had a really good feeling in the car.

“So far, so good. Obviously 4.8 seconds is not a lot so we will need to keep on pushing hard tomorrow. May the best man win!”

A dejected Neuville – twice a winner in Spain – completed the podium 7.7sec behind Rovanperä. He lacked the pace to threaten the leading pair in the afternoon and was hesitant to push too hard for fear of his i20 N sliding.

“We do not have the speed and, to be honest, I can’t really push to the maximum,” he explained. “The car starts to slide and it’s difficult to know where to improve.”

Neuville’s team-mate Ott Tänak ended 7.5sec further down in fourth overall ahead of Dani Sordo’s similar car. It was a fraught day for the pair, with Tänak forced to overcome hybrid unit faults and an alternator belt failure while Sordo punctured his front left tyre on SS7.

Sordo wasn’t the only one to suffer tyre drama. Elfyn Evans endured the same outcome after hitting exactly the same rock, as did the Welshman’s Toyota ally Takamoto Katsuta. The pair arrived back to service in sixth and eighth respectively, sandwiching the M-Sport Ford Puma of Craig Breen.

Adrien Fourmaux made a sensible start to his first FIA World Rally Championship outing since August and trailed Katsuta by just 2.7sec at close of play. Gus Greensmith, also driving a Puma, completed the top 10 another 7.5sec in arrears.

In the ERC event of RallyRACC, it’s Yoann Bonato who leads the rally with his Citroën C3 Rally2. The final stage of the day, SS8, was cancelled for the ERC event. This year’s ERC champion Efrén Llarena is in second, 18.5 seconds behind Bonato. Javier Pardo occupies P3 overnight, 1:39.9 behind the leader.