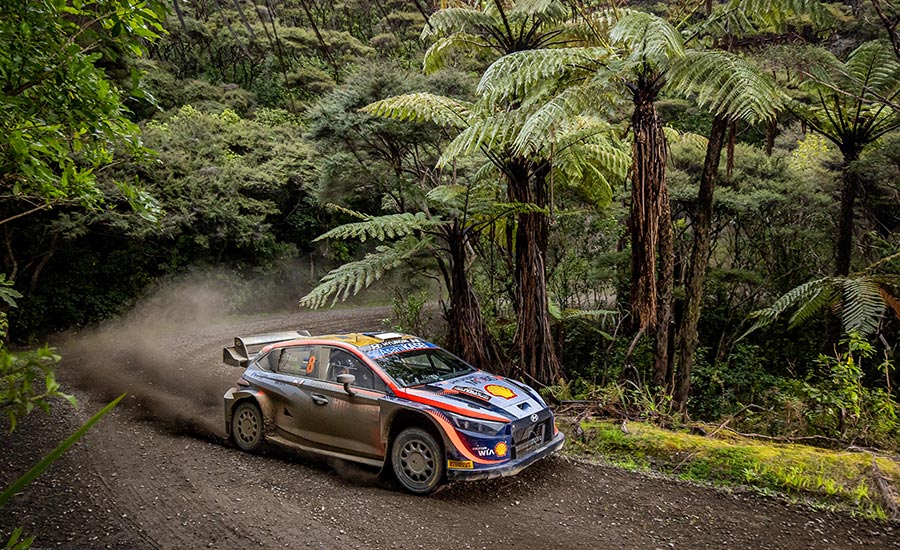 Ott Tänak leads Rally New Zealand at the end of Friday’s action by a small 0.2s over Toyota’s Eflyn Evans. Sébastien Ogier dropped from first to third in the final stage of the day after brushing a tree branch.

Just 7.2sec blanketed the leading four drivers after 158.56km of frantic action on the longest leg of this year’s FIA World Rally Championship so far.

Tänak was initially dominant in his Hyundai i20 N and opened up a slender advantage as heavy downpours plagued the morning’s stages on gravel roads in the Waikato Region.

When the rain clouds briefly parted ahead of the second pass of Whaanga Coast, however, the Estonian driver was hampered by an early road position and struggled for traction as the surface dried and became loose.

He was passed by Toyota Gazoo Racing star Elfyn Evans as well as the Welshman’s part-time colleague Ogier who, aided by a lower starting position, climbed from fifth to first overall after outpacing the entire field by 8.2sec while managing his soft compound Pirelli rubber to perfection.

Wet weather returned for the closing two speed tests and Ogier soon came unstuck – brushing a tree branch with the rear end of his Yaris which ripped the upper half of the spoiler from the car.

That enabled Tänak to crank up the pressure and he stormed back in front with a stage win on the final test as Ogier struggled with reduced rear aero, ending 6.7sec adrift of the lead. Evans’ consistency was rewarded and he swooped into the runner-up spot – trailing the leader by just two-tenths of a second.

Road-opening duties actually played to Kalle Rovanperä’s advantage as the Toyota hotshot avoided the worst of a heavy shower on SS6. The Finn finished the day just 0.5sec behind Ogier in fourth overall but, unless he can overhaul Tänak within the next two days, will not be able to seal the drivers’ title this week.

M-Sport Ford’s pair of Pumas were initially dominant as Craig Breen and Gus Greensmith locked out the top-two after the opener. Things quickly turned sour, however, when Breen retired after sliding down a banking on the same corner which caught out Colin McRae in 2002.

Greensmith was left flying the flag for the British squad and he coped admirably to end the day 36.6sec back from Rovanperä in fifth.

Thierry Neuville’s morning was plagued by two costly spins but his luck improved as the day wore on. A softer suspension set-up heralded more confidence in his i20 and by close of play the Acropolis Rally Greece winner had moved to within 1.8sec of Greensmith.

Competitors journey north of rally base Auckland on Saturday for double runs through Kaipara Hills (15.83km), Puhoi (22.50km) and Komokoriki (5.81km). A return to Auckland for service separates the loops, which add up to 88.28km.