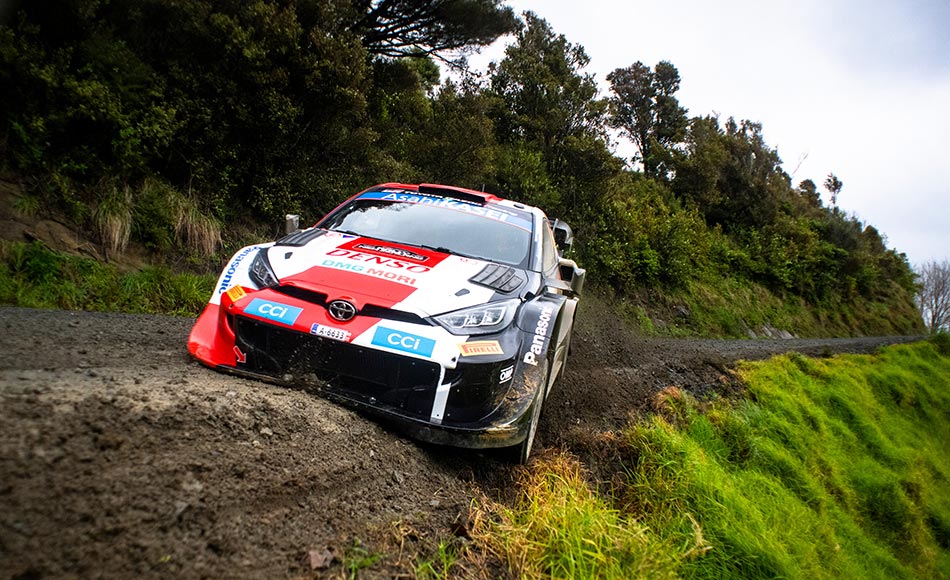 Kalle Rovanperä moved up into the lead during on Saturday at Rally New Zealand and is on the verge of taking a historic first WRC title tomorrow.

A 29.0sec lead heading into Sunday’s final leg was the best 22nd birthday present the Toyota Gazoo racing star could have asked for after six technical stages on gravel roads north of Auckland.

The icing on the cake was a 46.4sec buffer over his main title challenger Ott Tänak, who finished the day in third after being lumbered with 15 seconds worth of time penalties.

Rovanperä himself was handed a five-second penalty before the day had even started for his own hybrid rule breach, but the Finn carved through the pack on muddy roads to seize the top spot by mid-leg service before taking a brace of stage wins in the afternoon.

Tänak initially stayed within touching distance of his rival despite being unhappy with the feeling aboard his Hyundai i20 N but slipped out of touch when he received an additional 10sec sanction for a second hybrid breach.

Event stewards ruled the energy released from Tänak’s car during hybrid boosts on SS7 exceeded the maximum value allowed for that stage, with Hyundai team manager Pablo Marcus explaining the mistake was simply due to an error made by engineers when setting the hybrid unit’s parameters.

If the top-three positions remain as they are, fourth-fastest on Sunday afternoon’s bonus points-paying Wolf Power Stage will be enough to crown Rovanperä as the youngest-ever WRC champion.

“A great day,” smiled Rovanperä. “I can be really happy with what we did in these extremely difficult conditions. We pushed really hard and I am happy.”

Ogier’s afternoon didn’t go without drama. He incurred a 10sec penalty for arriving late to SS12 and was keen to stay in line for a solid manufacturers’ points haul after team-mate Elfyn Evans retired with roll cage damage sustained during an off on the first pass of Puhoi.

Almost one minute back from the podium was Thierry Neuville who, along with i20 partner Oliver Solberg, also picked up time penalties for hybrid rule breaches. The Belgian driver lost third gear during the morning loop but arrived back to service 1min 53.5sec clear of fifth-placed Solberg.

Solberg’s top-five position came at the expense of Toyota youngster Takamoto Katsuta, who slid off the road on a tight left-hander in the penultimate stage. Twenty-one-year-old Solberg was relieved not to be joining Katsuta on the retirements list, having limped through three stages with a misfire.

Ford Puma driver Gus Greensmith had been running fifth but was left out of contention with a spectacular roll on SS10. After assessing the damage, Greensmith’s M-Sport Ford squad confirmed he will not restart on Sunday.

Such was the rate of attrition that WRC2 leader Hayden Paddon rounded off the top-six in a Rally2-specification Hyundai. The Kiwi had 27.3sec in hand over Puma privateer Lorenzo Bertelli, while Kajetan Kajetanowicz, Shane Vangisbergen and Harry Bates completed the top 10.