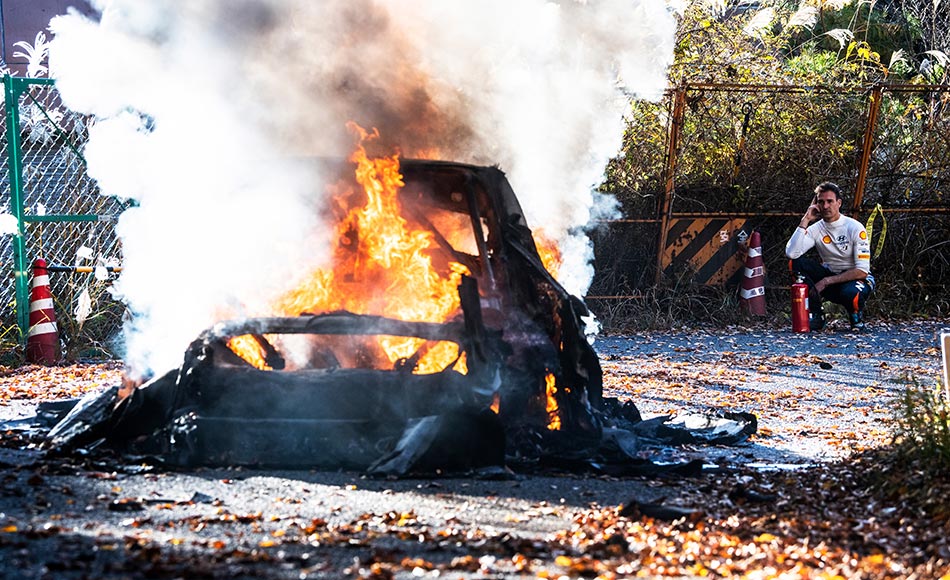 Toyota’s Elfyn Evans leads Rally Japan by 3 seconds over Thierry Neuville after Friday’s stages. The first full day turned out to be a dramatic one, but despite several cancellations, the top three are separated by just 5.1 seconds with 2022 world champion Kalle Rovanperä in P3.

The day started with the longest stage of the rally, Isegami’s Tunnel. Ogier picked up a puncture and lost 2 minutes and 43 seconds as a result. “Our race is already over,” said Ogier at the end of SS2.

More drama happened in SS2 as Dani Sordo stopped on the stage as he saw flames appearing. The crew used their own fire distinguisher, as well as Gus Greensmith’s fire distinguisher, but the fire expanded quickly and there was no way to save the car anymore, meaning that the i20 N Rally1 burnt out.

The stage was red-flagged as a result of Sordo’s fire. However, there was more drama in SS2 as WRC2 title challenger Kajetan Kajetanowicz crashed earlier in the stage, which means the Pole is out of the battle for the WRC2 title. Emil Lindholm is now in pole position to win the title. The Finn needs to finish fifth in WRC2 to seal the title and is after Friday in P3 behind Pajari and Suninen.

All cars behind Sordo received a nominal time for SS2. Ogier completed the stage before the red flag, meaning his time was maintained, dropping him to last place, almost three minutes down from the lead.

SS3 was cancelled due to delays following the fire of Sordo’s car in SS2. The subsequent SS4 saw Craig Breen crashing out. The Irishman, competing with his new co-driver James Fulton, went off the road into a barrier: Game over. Breen’s team-mate Gus Greensmith dropped a minute due to a driveshaft problem, making the stage one to forget for M-Sport.

Every WRC2 driver received a nominal time as the stage was red-flagged following Breen’s off.

After SS4, Neuville and Evans were the joint leaders of the rally, followed by Rovanperä in P3, just 0.7s shy of Neuville and Evans. Tänak was fourth, 9.1s behind the leaders, while home hero Katsuta was fifth, 15.1s off the lead.

SS5, a re-run of Isegami’s Tunnel, was shortened to 14.33 kilometres. The stage finished ahead of the place where Sordo’s car burned out. Evans won the stage by 1.1s over Neuville to lead the rally by the same margin.

SS6 was supposed to be the penultimate stage of the day, however, SS7 was deemed unsafe due to damage to one of the barriers following Breen’s crash earlier, meaning that SS6 was the final stage of a hectic day.

It meant that Evans leads the rally at the end of the day by 3 seconds over Hyundai’s Neuville. Rovanperä is not far away in third, 5.1s behind his team-mate who seeks his first win of the season. Tänak had some hybrid issues during the day and is 13.9s off the lead in P4, 6.7s ahead of Katsuta.

Gus Greensmith is sixth, 2 minutes off the lead and 21.4s ahead of the leader in the WRC2 in Japan: Sami Pajari. Pajari holds a 5.3s advantage over his countryman Suninen and is a further 3.1s ahead of another countryman in Lindholm. Lindholm took is easy in SS6, knowing that a P5 finish sees him seal the title.

Sébastien Ogier recovered from last to P10 at the end of the day. The eight-time WRC champion is just under 3 minutes off the lead.