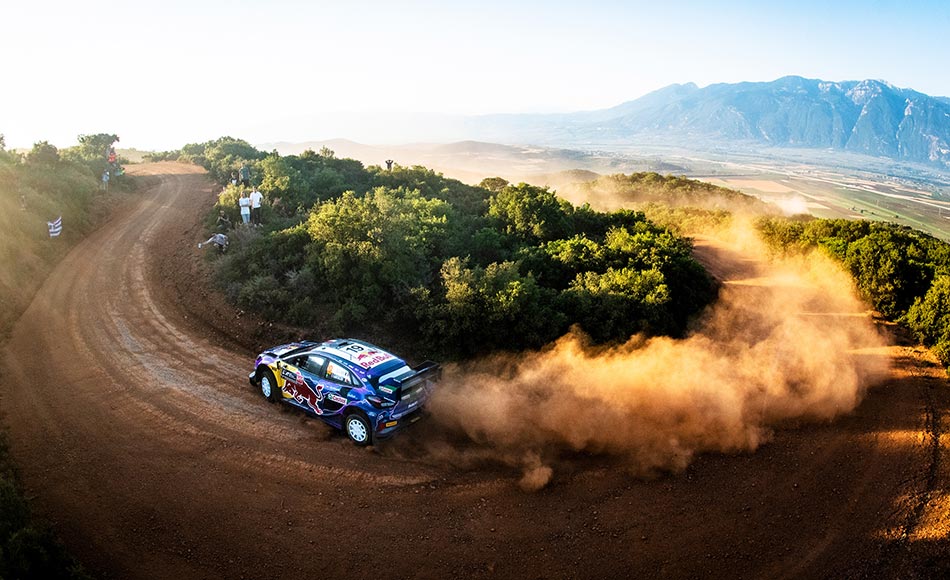 It was a dream day for the British squad with its Ford Puma cars topping the timesheets on every single speed test as the rally threaded its way north following Thursday’s spectacular start in Athens.

Loeb was initially dominant on the rugged gravel roads and opened up an early advantage on his fourth WRC start of the season. However, as temperatures soared, the nine-time world champion lost momentum.

An overshoot on a hairpin bend in Dafni was enough to break Loeb’s stride and he gave way to Puma team-mate and fellow Frenchman Loubet, who seized the top spot whilst also grabbing his first stage win in the WRC’s top-flight.

Loubet looked likely to lead overnight after notching up another fastest time at Livadia but Loeb’s superior experience came to the fore.

Armed with previous knowledge of the stage from his last Acropolis outing in 2012, the 40-year-old shaded his apprentice by 10 seconds in Bauxites to go back in front.

“I decided to try really hard in this last one because I was losing too much time in the previous stage and I didn’t feel too confident,” Loeb said of his late push.

“I just said: ‘Okay, I need to finish on a good rhythm’. There was a stone in the ground which I hit sideways and it lifted the car onto two wheels, but it was no problem.”

Loubet remained upbeat despite relinquishing the position and explained how minor mechanical niggles were costing time.

“We can be happy with what we have done,” he said. “We had an issue with the brakes at the beginning of the stage and something with the power steering at the end.

“I didn’t want to take any risks and I just brought the car home. It’s still amazing – it’s like a dream to be fighting with Loeb.”

Leading Hyundai driver Thierry Neuville was a further 7.3sec behind Lappi – an admirable effort considering his starting position of fourth.

Lingering dust hampered the Belgian early in the day and an imbalanced set-up left him fighting with understeer. Nevertheless, he headed i20 N colleague Dani Sordo, who lacked confidence in his pace notes, by 22.2sec.

Ott Tänak completed most of the leg with a faulty hybrid unit which left his Hyundai short on power. Behind him were Gus Greensmith (Ford) and Elfyn Evans (Toyota) with just 3.4sec separating the trio.

Saturday is the longest and toughest leg and covers 147.98 competitive kilometres west of Lamia. Double passes through Pyrgos and Tarzan will be especially hard.