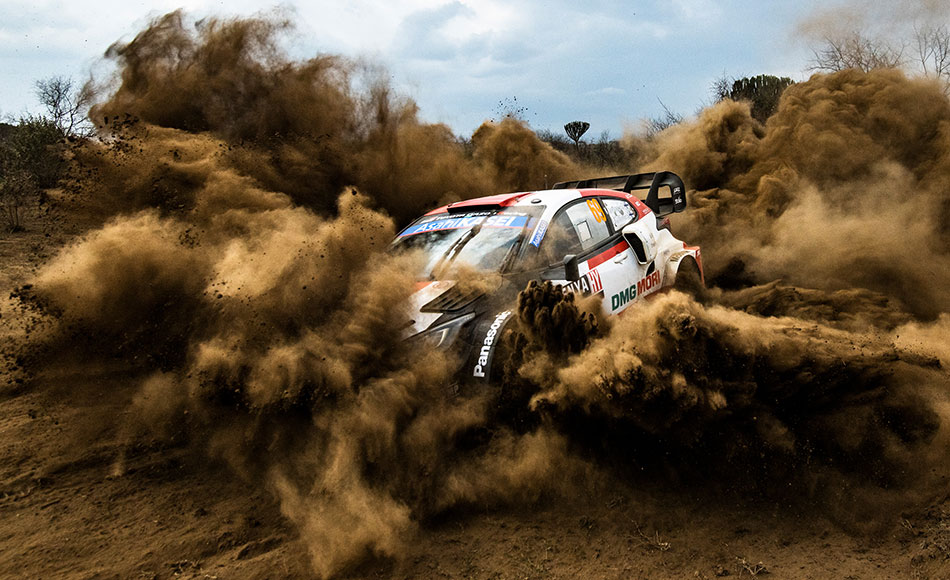 Championship leader Rovanperä languished in 11th overall on Thursday evening after puncturing a tyre on the curtain-raising super special stage, but was immediately into the podium fight on Friday’s sandy speed tests on the shores of the Great Rift Valley’s Lake Naivasha.

Car-breaking roads and thick fesh-fesh sand punished crews as more than half of the FIA World Rally Championship field suffered some form of drama during the day, but Toyota Gazoo Racing’s GR Yaris cars performed well under the pressure.

Defending Kenya winner Ogier picked up where he had left off on Thursday and led for the majority of the six stages. He was briefly overtaken by team-mate Elfyn Evans in the morning, but moved back in front in the afternoon’s opener when the Welshman suffered a soft rear tyre.

Rovanperä lingered inside the leading trio and managed to bag three stage wins before seizing the top spot late in the day when his colleague stopped to change a wheel during the Kedong finale.

The Finn was pleased to be carrying a 14.6sec buffer into Saturday’s monster leg despite having to sweep dust from the surface as the first car on the road.

“I think we did a good job,” reflected Rovanperä. “The plan was to be fast and safe and we are in a good position now, but tomorrow will be very challenging.

“I’ve never really experienced anything like this before. Last year we didn’t have this many soft sections of road, so that was something a bit new.

“Of course, it’s always challenging here. There was still some [road] cleaning on the second pass, but other than that we have enjoyed the stages – except the last one – I think we all felt relieved to finish that,” he added.

Evans remained Rovanperä’s nearest challenger, but he found it difficult to judge exactly how hard to push and what risks to take. He ended just 2.9sec clear of fourth-placed Ott Tänak.

Tänak started on the back foot when the gear lever of his Hyundai i20 N snapped during the first stage. Thanks to some quick-thinking, the Estonian carried out a makeshift repair, using the car’s spare wheel brace as a temporary shifter before going on to claim a brace of top-three times.

Takamoto Katsuta was demoted from second to fourth overall in the final stage. The Toyota youngster slowed to pass a stricken Craig Breen – who retired his M-Sport Ford Puma with front right suspension damage. The stewards corrected Katsuta’s time with 12 seconds on Friday evening after examining data and onboard video’s of the Japanese driver. As a result, Katsuta was promoted back to second and ends the day 14.6s off the lead.

Second in the championship Thierry Neuville also had a troublesome day with his Hyundai. The car briefly lost power after scooping up a cloud of dust on SS4, with Neuville also complaining of traction and drivability issues. He trailed the frontrunners by almost one-minute, ahead of Ogier, who was 1min 10.7sec further back.

Last year, Ogier clawed back a similar deficit to take victory after breaking a suspension damper on Friday. Anything is still possible, although the Frenchman appeared to be visibly dejected back at the Naivasha service park.

“Being so far behind, I can’t really say we are in the fight,” he said. “Of course, a lot of things can still happen, but it’s not the same fight when you are this far behind. I am pretty sure things will happen tomorrow, but it’s still frustrating.”

Gus Greensmith was the only M-Sport Ford championship contender to finish the day, but he was almost 15 minutes off the pace after stopping to make stage-side repairs on Kedong 1.

Sébastien Loeb’s Puma stopped with engine troubles on the way back to midday service and Adrien Fourmaux’s similar car also bowed out with a transmission-related failure.

The day begins with Soysambu (29.32km), which has been lengthened since last year. Next up is a blast over Elmenteita’s (15.08km) oft-used tracks in the Delamere Estate, followed by Sleeping Warrior (31.04km), set in the shadow of a hill that resembles a Masai warrior lying down. The trio are driven for a second time after service.