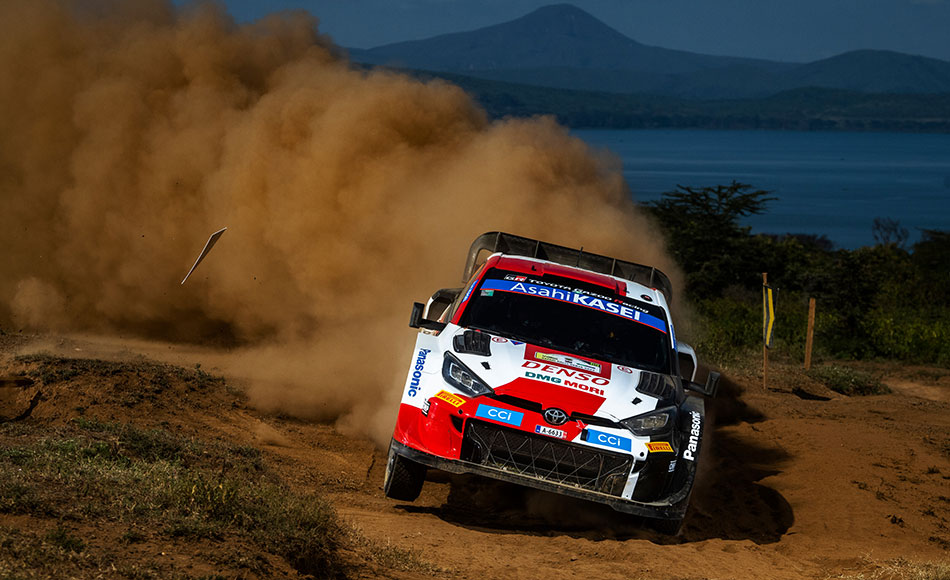 WRC Championship leader Kalle Rovanperä was fastest in Safari Rally Kenya’s shakedown this morning. The Toyota driver ended up half a second ahead of Hyundai’s Thierry Neuville.

The 5.4 km Loldia shakedown stage was softer than expected. A sign of what may be the case during the rally according to Rovanperä: “I was not expecting such rough conditions like we saw on the recce and the roads are even more soft than last year”, the Finn said.

Ott Tänak and Sébastien Loeb were joint third fastest, 1.8s off Rovanperä’s benchmark and 1.3s behind Neuville. Sébastien Ogier’s first run through was his fastest run, which in the end was good enough for P5. The eight-time champion topped the timesheets after the first run and was, together with Oliver Solberg, the only driver to post his best time in the first run.

The soft roads meant that most drivers set their fastest times in the second run through. Takamoto Katsuta was sixth fastest, followed by Gus Greensmith and Elfyn Evans who were joint seventh fastest. M-Sport drivers Adrien Fourmaux and Craig Breen, who was the only driver to improve in his final run, rounded off the top 10.

Oliver Solberg was eleventh fastest in his Hyundai i20 while Jourdan Serderidis, who makes his Rally1 debut in the WRC this weekend, was thirteenth. They were split by the fastest WRC2 driver, Gaurav Gill, driving a Skoda Fabia R5.

The rally starts on Thursday afternoon with the 4.84 km long Kasarani Super Special in Nairobi. The first full day of action will be on Friday.