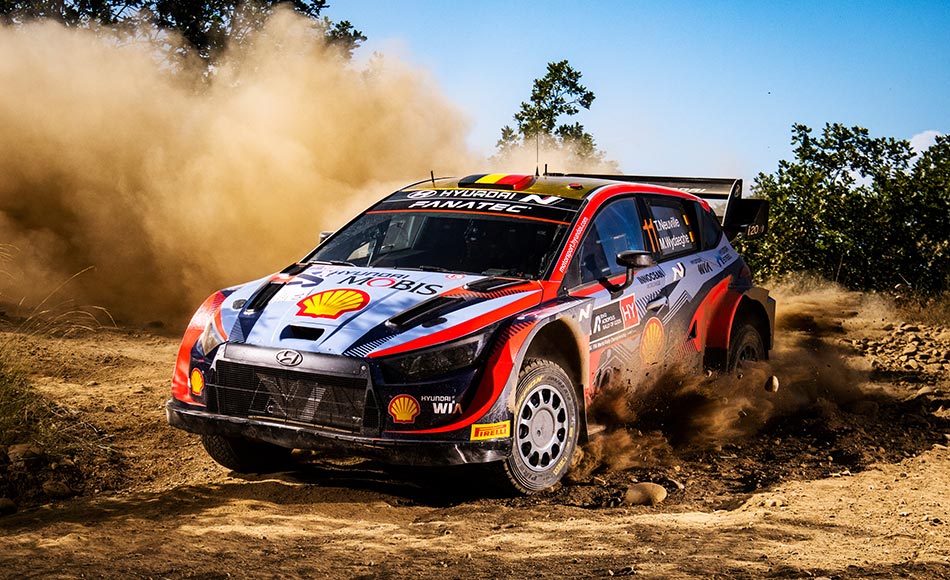 Thierry Neuville leads Acropolis Rally Greece with a 27.9-second margin heading into Sunday after a brutal day around Lamia.

One-third of the top-tier crews failed to complete the brutal 147.98km route on rugged gravel stages near Lamia – but Neuville’s Hyundai Motorsport squad was impenetrable and is poised for what could be the manufacturer’s first-ever 1-2-3.

After trailing Friday leader Sébastien Loeb by 16.0sec overnight, the Belgian driver was surprised to find himself at the top of the standings just one stage into the penultimate leg when Loeb’s M-Sport Ford Puma threw an alternator belt after the finish.

Neuville was unchallenged from that moment onwards and he maintained an impressive pace throughout the day, romping to three fastest times as his rivals hit trouble. A dashboard warning alarm for low battery voltage provided a brief scare but did not appear to have any effect on the car’s performance.

He carries a hefty 27.9sec advantage over Ott Tänak into Sunday’s three-stage finale and, as it stands, remains on-course to claim his first-ever victory of the WRC’s hybrid era.

“It has been a great day for us,” reflected Neuville. “A bit of a hard one this afternoon with some trouble with the car, but we survived and we are here now. We had a warning for battery voltage, but it seems okay.

“My tyres weren’t so good for the last few stages and I was just trying to drive cleanly through to avoid punctures,” he added.

Although Tänak started strongly with a stage win at Pygros, he was unable to make any major gains on his leading partner since moving into the top-three when Pierre-Louis Loubet’s Puma punctured on SS9.

Tänak complained of differential niggles during the morning loop but things seemed to improve after service and he headed colleague Dani Sordo by 25.0sec at close of play.

Sordo swooped onto the podium late in the day at the expense of Toyota man Esapekka Lappi, whose Yaris developed a fuel-related problem in the penultimate stage. The engine kept cutting out and he was eventually forced to retire on the road section.

Toyota’s hopes then rested on the shoulders of Elfyn Evans, who brought his Yaris home in fourth overall. The Welshman struggled to find a rhythm, especially in loose conditions on the morning pass, but pressured Sordo in the closing stages to end only 7.1sec behind.

Loubet recovered to round off the top-five, albeit more than two minutes back from the lead. His Puma colleague Craig Breen followed, with Toyota youngster Takamoto Katsuta behind in seventh after a scrappy day which included two spins.

Kalle Rovanperä’s hopes of sealing the drivers’ title this week were dashed when he swiped a tree on the first pass through Perivoli. Although he was able to continue, the Toyota wunderkind dropped over 11 minutes as he limped back to service with body damage and brake issues.

M-Sport’s woes were compounded by the retirements of Gus Greensmith and Jourdan Serderidis. Greensmith had been running in the top-six but stopped with a mechanical failure on SS11, while Serderidis’ Puma hit electrical trouble after leaving the lunchtime service.