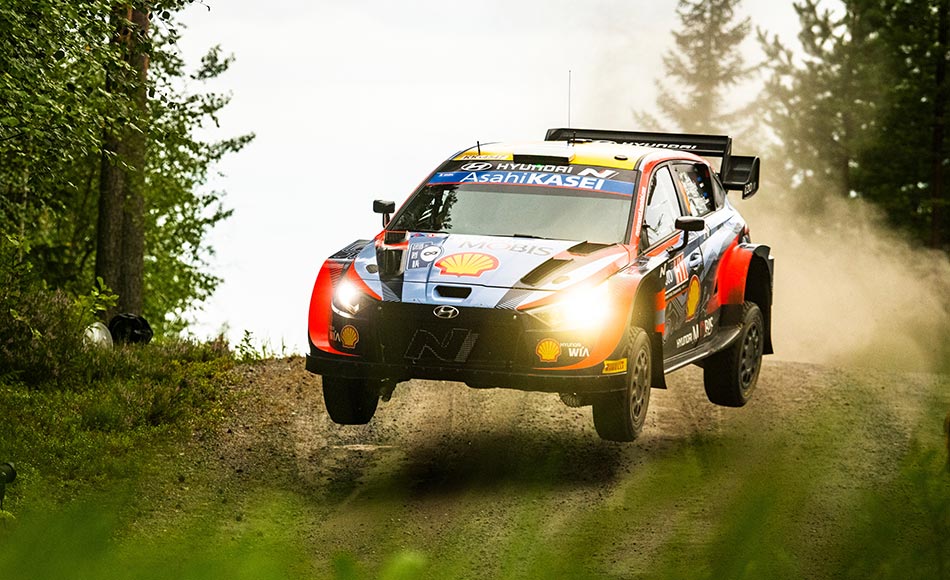 The Estonian, twice a winner of this classic gravel event, snatched the top spot from early leader and Hyundai colleague Thierry Neuville on the very first stage and clung onto the position all day long.

Set-up frustrations threatened to rattle Tänak’s confidence, especially during the first half of the leg on stages to the north of host city Jyväskylä.

However, aided by some seat-of-the-pants driving, the i20 N star maintained his pace to head Toyota GR Yaris rival Esapekka Lappi by 6.2sec at the day’s midpoint.

Lappi – also a former Finland winner – responded by cranking up the pressure in the afternoon. He stormed to three stage wins in the final loop to whittle down the deficit but was still unable to overturn the charging leader.

At close of play, Tänak held the upper hand by a slender 3.8sec.

“It’s definitely a lot better than we expected,” said Tänak. “We definitely did not expect to be in the fight, so to end the day in this position is really positive.

“The other boys were quite slow to wake up, but it seems the Toyotas are slowly getting to where they should be.

“Let’s see tomorrow. The weather will probably change a bit as well, but I would say I was on the limit from the first corner of the first stage,” he added.

Elfyn Evans was slow out of the blocks but held onto third overall. He arrived back to service 12.2sec down on Lappi and was embroiled in a tight scrap with Yaris team-mate Kalle Rovanperä, who finished just 1.7sec behind.

As championship leader, Rovanperä opened the road and struggled to find traction in some of the loose gravel sections which resulted in some hairy moments. The 21-year-old will start Saturday with a more favourable road position and promised a big push on his home stages.

Craig Breen ended over half a minute back from the lead as M-Sport Ford’s frontrunning driver in fifth overall. An intercom problem in the opening stage was a minor cause for frustration and the Puma driver was at a loss as to why he didn’t have the pace to challenge for stage wins. Takamoto Katsuta was just 3.9sec further back in another Toyota.

A frustrated Thierry Neuville brought his Hyundai home in seventh overall. Like Tänak, he was unhappy with his set-up and struggled to keep the rear end of the car under control.

Oliver Solberg was Friday’s big casualty, rolling his Hyundai on the very first corner of the day’s first stage. Roll cage damage means he will not restart tomorrow.

Saturday is clustered around Jämsä and, with 150.30km of relentless action, comprises almost half the rally’s competitive distance.