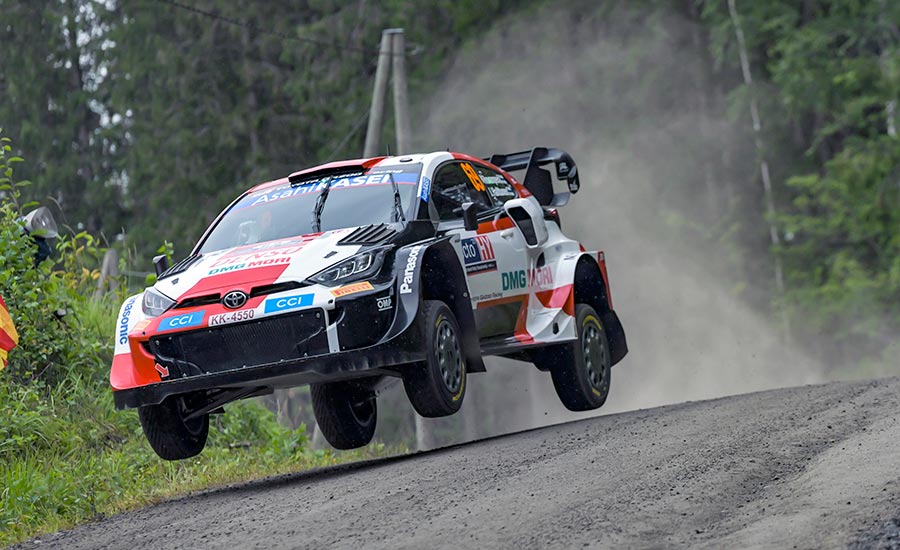 WRC championship leader Kalle Rovanperä got off to a good start at Rally Finland as he topped the timesheets at Thursday morning’s shakedown.

Rovanperä set a time of 1:56.1 in the 4.48-kilometre Rannankylä stage in his fourth and final run to pip his Toyota team-mate Esapekka Lappi by half a second.

Lappi, who took his only WRC win to date at Rally Finland in 2017, was four tenths ahead of Hyundai’s Ott Tänak. The 2019 World Champion wasn’t too happy after his first run through: “There is no feeling in the car. Finland will be difficult,” the Estonian said.

Takamoto Katsuta was fourth quickest, 0.4s adrift of Tänak and 0.3s ahead of his Toyota team-mate Elfyn Evans who did a late final run to go ahead of Oliver Solberg who was six fastest, a tenth behind Evans.

Craig Breen was seventh, 0.3s behind Solberg. The Irishman was followed by Thierry Neuville and Pierre-Louis Loubet who set identical times for P8. Loubet did six runs through shakedown and steadily improved his time, setting his best time in the final run. Adrien Fourmaux rounded off the top 10 with a 1:58.8, 0.3s behind Neuville and Loubet.

Jari Huttunen makes his WRC debut with a Ford Puma Rally1 this weekend. The Finn was eleventh fastest and trailed Fourmaux by 0.4 and was 1.1s ahead of Gus Greensmith who was the slowest in this morning’s shakedown. The M-Sport driver didn’t do a pre-event test and thus shakedown. Greensmith said: “Proper wake-up call, when you’ve not had a test. So yeah, getting into it this morning and then see what we can do for the rally.”