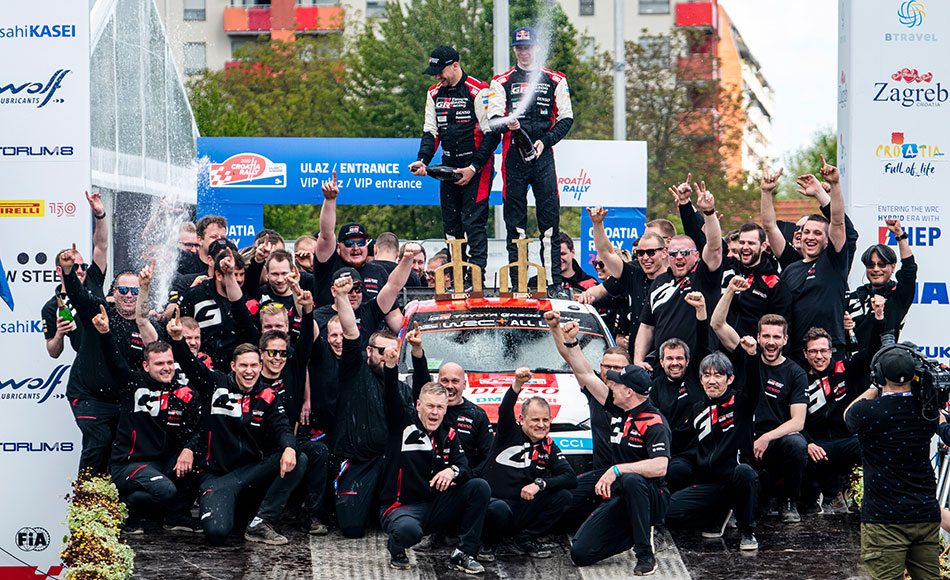 Kalle Rovanperä has won Croatia Rally 2022, the third round of the 2022 World Rally Championship, despite rain mixing things up in the penultimate stage of the rally. It’s the Finn’s second rally win in a row and his fourth career win as he extends his championship lead to 29 points.

Rovanperä led from the start of the three-day rally in the hills around Zagreb in his Toyota GR Yaris, only for a storm in the penultimate speed test to wipe out his hard-earned advantage.

A resurgent Ott Tänak, whose gamble on softer Pirelli tyres gave his Hyundai i20 N a performance edge on the streaming asphalt, grabbed a 1.4sec lead.

The pendulum swung back towards Rovanperä as drier roads in the closing Wolf Power Stage offered hope, but the odds remained firmly in Tänak’s favour as mud and dirt littered the final 14.09km.

Rovanperä threw caution to the wind and remarkably overturned the deficit to claim back-to-back FIA World Rally Championship wins by 4.3sec. Victory extended his points lead to 29 after three rounds of the 13-event season.

He had dominated the early stages of the event and was almost 90sec clear until falling into Tänak’s clutches following a puncture on Saturday morning. He rebuilt his lead to half a minute until the deluge set up a breathtaking finale.

Rovanpera: “Toughest win of my career”

“I was sure we could not be so fast with these tyres, but it’s amazing,” smiled Rovanperä. “We pushed really hard and I think we deserve it this weekend. For sure, it was the toughest win of my career.”

It was a disappointing outcome for Tänak, whose victory drought dates back to February 2021. “I didn’t take any risks but Kalle obviously did a good drive,” he said. “We were fighting for the win, but only because of clever decisions and tyre choices.”

The Estonian finished 2min 16.7sec clear of team-mate Thierry Neuville. The Belgian overhauled Craig Breen on the final morning to claim a podium despite a torrid weekend which would have forced many to give up.

He and co-driver Martijn Wydaeghe were on the point of collapse after pushing their car for 800 metres into service on Friday after stopping with alternator problems.

Time penalties and speeding fines knocked them further back and they almost gave up a podium with sight of the finish after hitting a bank and almost rolling.

Breen survived an overshoot and a spin to take fourth in a Ford Puma. The Irishman fended off a closing Elfyn Evans, whose fifth place marked a first points finish of the year for the GR Yaris driver. Japan’s Takamoto Katsuta was a distant sixth in another Yaris.

The tricky asphalt, allied with heavy rain and fog, proved highly attritional and the remainder of the leaderboard was filled by drivers from the WRC2 support category.

The series switches to gravel for the first time in 2022 at Vodafone Rally de Portugal. The fourth round is based at Matosinhos on 19 – 22 May.

WRC 2022 Manufacturers’ Championship standings after Round 3/13