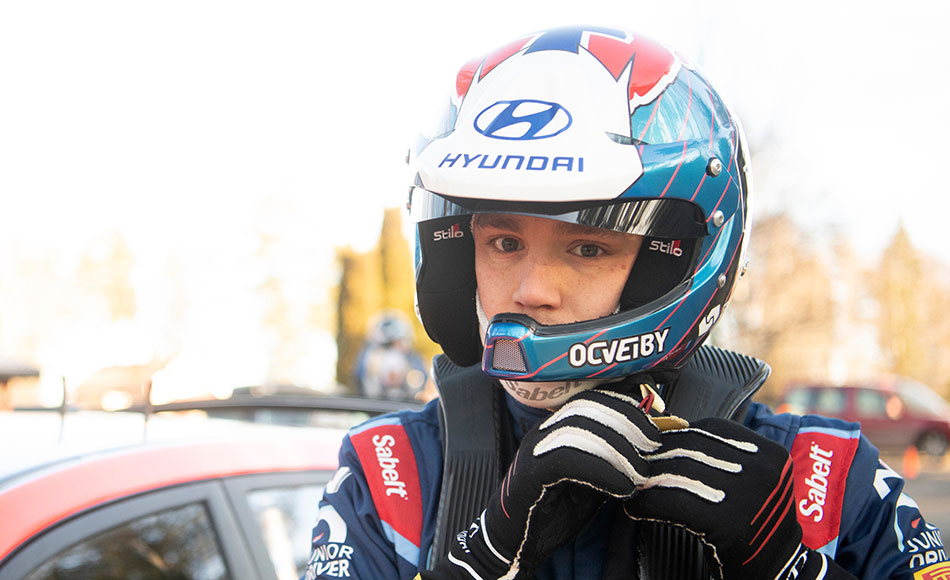 Ole Christian Veiby says the stewards decision to give him a 6-month WRC suspension is “a big shock”. The Hyundai junior apologized for the situation.

Veiby tested postive for COVID-19 last Thursday after taking a routine COVID-19 test. The Norwegian did a rapid test and a regular PCR-test afterwards, both of which revealed a positive result.

Veiby did drive in Thursday morning’s shakedown but wasn’t allowed to start the rally on Thursday night after testing positive. The Hyundai WRC2-driver was ordered to isolote in his hotel and his co-driver Jonas Andersson was set in quarantine.

The FIA has given Veiby a 6-month WRC suspension as the 24-year-old didn’t isolote and drove back to Spain later on Thursday. Veiby breached another rule as he didn’t declare he had been in close contact with a person who tested positive for COVID-19 during the week before Rally Portugal.

“The World Rally Championship and the FIA take the regulations of FIA ISC Appendix S and the procedures to reduce the exposure to the pandemic extremely seriously.

“Mr. VEIBY did not state that he had been in close contact with a positive case in the days before the Portugal Event and he did furthermore not have permission to, nor did he seek permission to leave Portugal to return to Spain when he was supposed to be in quarantine for 10 days in Portugal.

“This is a serious breach of the applicable regulations. The FIA and World Rally Championship are guests of the Portuguese nation for the running of this event and Mr. VEIBY’s actions have flaunted this welcome and national regulations.” reads the Stewards decision.

Veiby: “I can only apologize for the situation and I’m really sorry for the team”

Veiby revealed a statement on his Twitter after the Stewards decision was published.

“It’s with a big shock I have received the steward’s decision regarding my positive Covid-19 test in Portugal. I understand this is a serious situation but I acted according to the information given and in good faith.

“I tested negative 3 times over a 5-day period prior to the positive test. I have never hidden the fact that I spent time with a persion during the Targa Florio Rally [07-08 May] and after, that later tested positive. When my positive test result came back, I immediately isolated at the hotel. Back at the hotel, we received a phone call from a representative from the organizers Covid team, explaining us we could finish the isolation at home, if we drove by car. Which is why I left for our family-house in Spain, alone in a car, to avoid contact with other people.

“I can only apologize for the situation and I’m really sorry for the team. I sincerely hope I haven’t exposed anyone else with the virus.” said Veiby.

“Mr ANDERSSON’s driver Mr. VEIBY took a routine antigen test on Thursday, 20 May. The result was positive. He was retested with 1D NOW™ COVID-19 molecular rapid test as well as a regular PCR Test, both of which revealed a positive result. Contact tracing was done and co-driver Mr. Jonas ANDERSSON was found as the only close contact. Both competitors were isolated in their hotel rooms and the public health authority (PHA) was informed. Mr ANDERSSON was tested as negative for COVID-19.”

Andersson was ordered to quarantine for a and leave quarantine if approved by the authorities.

“Mr. ANDERSSON did not wait for this permission. In fact, Mr ANDERSSON was already in Spain when the possibility of the quarantining at a home address was presented to him.”

Another competitor was suspended for six months by the FIA. Co-driver Volodymr Korsia hid a positive test result to the Rally Portugal COVID-19 manager. Korsia tested negative a number of times afterwards.

“Mr. KORSIA may have been able to present a number of negative test results but to hide a positive result from the event officials is a serious breach of the applicable regulations.”