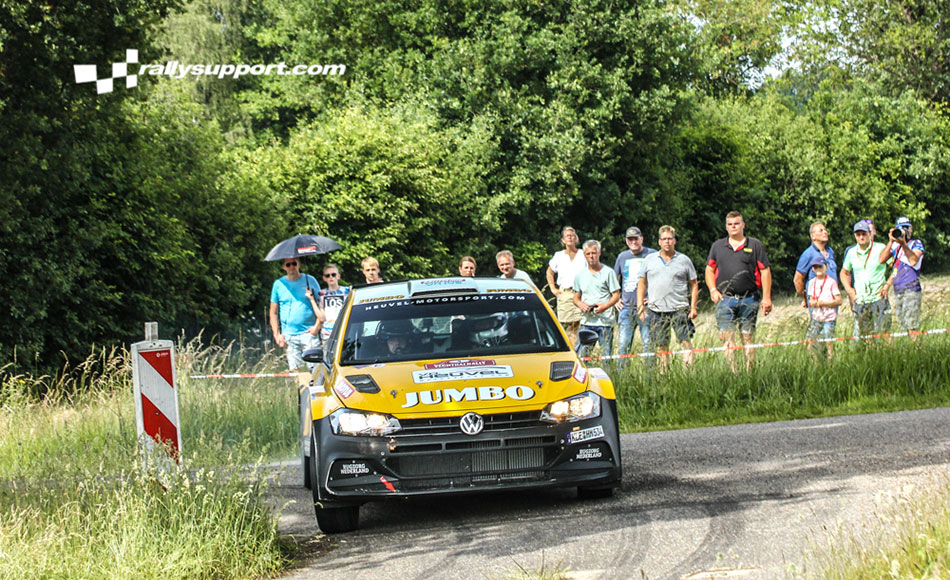 Jim van den Heuvel denied Hans Weijs a perfect 3 out of 3 rally wins in this season’s Dutch Rally Championship as the Volkswagen driver won the Vechtdal Rally by just 4.9s over Weijs.

The event consisted of five stages, each of which was run twice. A total of 126.54 kilometres of stages awaited the drivers around Hardenberg.

In the opening phase of the rally, it quickly became clear that the battle for the rally victory was going to be between Van den Heuvel and Weijs.

Incidents in the Historic event, which ran before the field of the rally, resulted in big delays up to over one hour in the first loop. Then SS4 was cancelled as there were not enough marshalls, further, the stage wasn’t properly closed for through traffic in all places, which raised safety concerns.

The delays and the heat of 30 degrees Celsius made it difficult for the drivers to keep in a good flow with temperatures up to 60 degrees in the car. Bob de Jong: “It’s difficult to keep the focus.”

Weijs won SS5 by 9 tenths over Van den Heuvel to lead the event by 1.4s at the halfway point.

Weijs extended his lead in the opening stage of the second loop by going 2.6s faster than Van den Heuvel. However, Van den Heuvel reacted quickly in the following Witharen-test by clocking 3.1s quicker to close the gap to 0.9s overall.

Van den Heuvel continued his strong pace in SS8 as he went quickest through again. This time he was 4.1s faster and leapfrogged into the lead of the rally by 3.2s with two stages to go.

Weijs won the penultimate stage by two tenths over Van den Heuvel by 2 tenths to close the gap to 3 seconds.

However, Van den Heuvel managed the pressure and won the rally with a difference of 4.9 seconds. The Volkswagen driver won the final Power Stage and picked up bonus points for the championship. The win in the Vechtdal Rally is Van den Heuvel’s second victory in the Dutch championship.