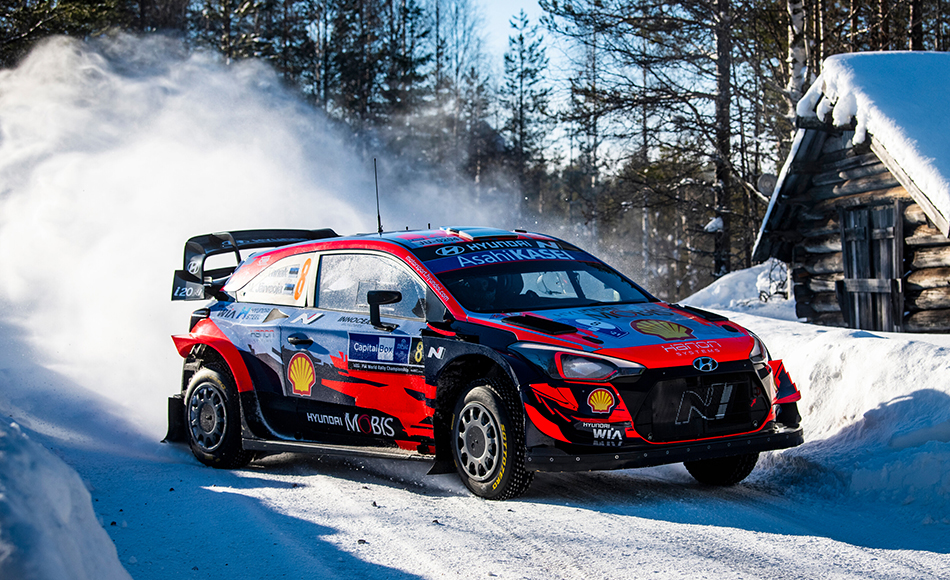 Ott Tänak has won the Arctic Rally Finland in his Hyundai i20 Coupé WRC. It’s Tänak’s 14th WRC-rally win and his second win for Hyundai.

The Estonian had a 24.1 second lead over Kalle Rovanperä at the start of the day. SS9, the first test of Sunday, was won by Toyota driver Elfyn Evans. Kalle Rovanperä was second fastest through, 1 second behind Evans. Thierry Neuville clocked a third fastest time in his Hyundai, but wasn’t satisfied with his pace notes: “We did a good stage but my pace notes were a bit slow. It’s really tricky to commit to the pace notes so I was maybe a bit careful, but I tried my best.”, Neuville said at stage-end.

Ott Tänak was sixth fastest in SS9, 5.9 seconds off Evans’ pace and 4.9 seconds behind Rovanperä. With only the Power Stage to go, the 2019 WRC-champion had a healthy lead of 19.2 seconds. Kalle Rovanperä increased the gap to Neuville every so slightly by 1 tenth to 1.9 seconds overall with one stage to go.

Kalle Rovanperä kept his second place overall with an incredible drive in the Power Stage. The 20-year old Finn won the Power Stage by 3 tenths over Craig Breen. Neuville was third in the final stage, 4 tenths behind Rovanperä.

Ott Tänak finished fourth in the Power Stage, 1.7 seconds off Rovanperä’s pace, to win the rally by 17.5 seconds. Sébastien Ogier claimed the final Power Stage point, and drops to third in the championship standings.

Oliver Solberg and Pierre-Louis Loubet both spun their Hyundai’s in the final section of the Power Stage. Solberg dropped 1.2 seconds behind Katsuta in the overall classification to finish seventh on his World Rally Car debut.

Esapekka Lappi won the WRC2 category in a dominant way. The Finn finished 47.7 second ahead of his nearest rival Andreas Mikkelsen. Teemu Asunmaa won in the WRC3 category with the Skoda Fabia Rally2 Evo.

With his win in the Arctic Rally Finland, Ott Tänak has now got 14 rally wins in the WRC: the same amount of wins as the German rally legend Walter Röhrl.

Next round of the 2021 World Rally Championship is Rally Croatia from April 22 – 25.

WRC Drivers’ Championship standings 2021 after Round 2

WRC Manufacturers’ Championship standings after Round 2