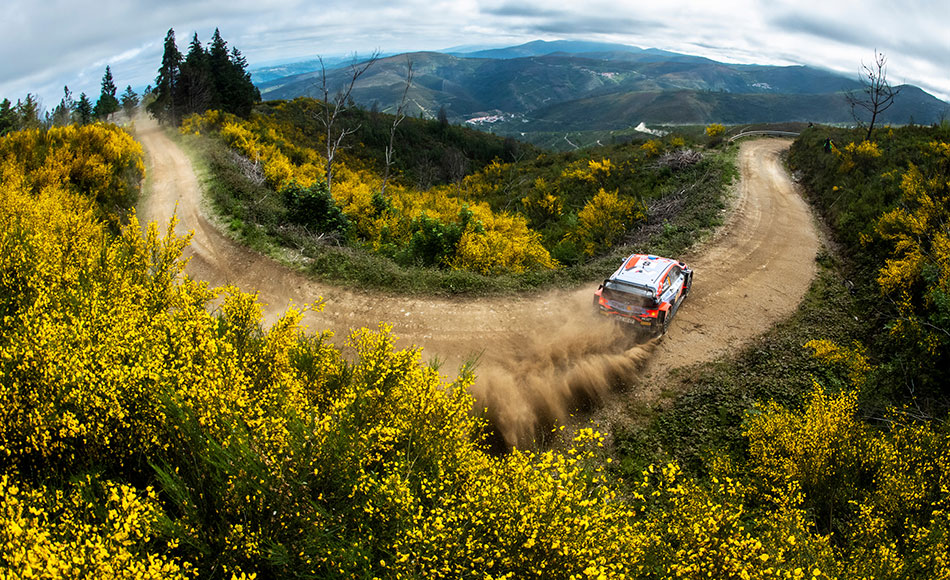 For the first time since Rally Italia Sardegna in October last year, the WRC returned to gravel for day one of Rally de Portugal.

The Hyundai’s dominated the first loop of three stages. Ott Tänak won the opening Lousa test by 0.4s over Dani Sordo, with Thierry Neuville in third, 0.5s behind Tänak.

Sordo then won stage 2 by 3.6 seconds over Tänak. Again, it was Neuville who was third fastest. In SS3, Sordo took his second consecutive stage win to lead the rally at mid-day by 6.7 seconds. Tänak, who wasn’t really satisfied with the feeling of his i20 Coupé WRC, was second. Neuville completed a Hyundai 1-2-3 at mid-day. The top 3 was covered by 10 seconds. Elfyn Evans was P5 in his Toyota, 17.6 seconds off the lead. Sébastien Ogier couldn’t follow the pace of the front running cars as he had to clean the road. “We will keep trying – but there is not much we can do.” Ogier said at the end of the first loop.

Drama for Neuville in second loop

Kalle Rovanperä won the opening stage of the second loop by 1.4 seconds over Gus Greensmith. Greensmith had a good opening loop, but tumbled down the order due to a puncture in the final stage of the first loop.

In SS5, Sordo took his third stage win of the day by going 6 tenths faster than Neuville. Neuville moved up to second as Tänak dropped 4.4 seconds in the stage. Takamoto Katsuta impressively moved up to fourth to be the fastest Toyota after SS5.

Tänak bounced back in SS6 by winning the stage by 0.3s over Neuville. Sordo lost 2.7 seconds to Tänak but still led the rally after the second pass through Arganil.

Drama for Neuville in SS7, as the Belgian went wide in a fast left-hander. The Hyundai driver clipped a tree stump but managed to finish the stage with big damage to the rear-right of his car. Neuville and co-driver Wydaeghe tried to fix the problems, but later had to retire as the damage was too big.

Rally leader going into stage 7, Dani Sordo, dropped to third overall. The Spaniard stalled the engine and didn’t have much grip left in his tyres. “I can’t push, because I don’t have the materials to push. The tyres are finished” said Sordo at the end of the stage.

Elfyn Evans lost almost 40 seconds in SS7 as the Welshman catched up with Neuville who was carrying damage to his Hyundai. Evans couldn’t pass Neuville as he has little visibilty due to the dust. The Toyota-driver got a notional time after the Clerk of the Course reviewed the video footage and split times. After SS7, it was Tänak who led the rally, just ahead of Evans (+2.7s), with Sordo in third (+3.0).

Tänak won the final Lousada Super Special Stage to increase his overnight lead to 6.0 seconds over Toyota’s Elfyn Evans. Dani Sordo’s, who got a puncture on the road section to SSS8, is third overall, 9 seconds behind Tänak. Takamoto Katsuta ends day 1 in P4, 15.4 seconds behind Tänak. Sébastien Ogier is fifth overall, despite opening the road for the entire day. Rovanperä, Greensmith and Fourmaux are P6, P7 and P8 respectively. Esapekka Lappi is the fastest driver in a Rally2 car and thus leads WRC2. Fellow Volkswagen R5-driver Nikolay Gryazin is only 2.2 seconds behind the Finn in P10 overall. Teemu Suninen is third overall in WRC2, 7.6 seconds behind Gryazin.

Yohan Rossel leads the field in WRC3. The Frenchman has a 3.5 second advantage over Poland’s Kajetan Kajetanowicz.