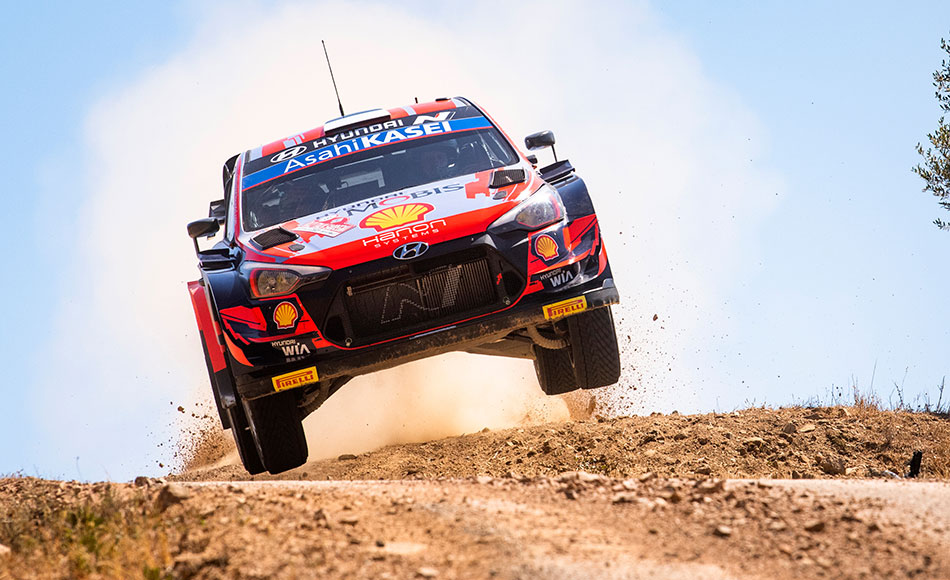 Ott Tänak leads Rally Italy at the end of Day 1 by 19.4 seconds over his teammate Dani Sordo.

Tänak had a dream first loop of the day as the Estonian won all four stages. Despite not winning every stage by big margins, the 2019 World Champion steadily increased his lead to 16.9 seconds at the end of the loop.

M-Sport’s Teemu Suninen, who is back behind the wheel of the Fiesta WRC this weekend, slid wide in SS1 and beached his car. The Finn had to retire for the day after just 20 kilometres.

Kalle Rovanparä was Tänak’s closest challenger for the lead, but the Toyota driver had to retire in the final stage of the morning loop with suspension damage despite not hitting anything: “We don’t know how or why it broke since I didn’t hit it anywhere.” explained the 20-year-old on social media.

There was more drama in SS4 as WRC2 championship leader Andreas Mikkelsen rolled in the stage. Mikkelsen managed to get back on four wheels with spectator help, but eventually had to retire in service with roll cage damage to his Skoda Fabia Rally2 Evo.

Tänak blitzed to a fifth stage win in a row in SS5. Sébastien Ogier set the second fastest time, 4.9 seconds down on Tänak and moved up to second overall despite being first on the road the entire day. Sordo struggled in the opening stage of the second loop as the Spaniard dropped 10.2 seconds to Tänak’s time. “The car was sliding all the time, and I was taking care of the tyres because it was so hot and I don’t know what it looks like.” Sordo said at SS5 stage end.

Sordo bounced back however, as he won SS6 by 1.8 seconds over Tänak and 7.3 seconds over Ogier, which meant that he was back up to second overall.

In SS7, Sordo won the stage marginally over Tänak with just 0.3 seconds separating the Hyundai drivers. Thierry Neuville dropped 22.2 seconds due to a puncture and slid behind Evans in the overall standings.. The Belgian set a joint fastest time in the final stage (SS8) of the day with Sordo. Tänak dropped 5.6 seconds in SS8, struggling for grip near the end of the loop. At the end of the day Sordo is 19.4 seconds behind Tänak.

Sébastien Ogier ends day 1 in P3, 36.2 seconds off rally leader Tänak. Evans holds P4 overnight, over a minute behind Tänak and just 1.2 seconds in front of Neuville. Takamoto Katsuta holds a steady P6 after SS8 and has a big gap behind him. Gus Greensmith suffered transmission issues in the final stage of the day and had to retire eventually. Pierre-Louis Loubet lost 4 minutes in SS7 and SS8 as he had to manage brake problems. The Frenchman in P14 overall overnight.

WRC2-leader Mads Østberg is seventh overall and is 27 seconds clear of Hyundai WRC2 driver Jari Huttunen. Ninth overall is WRC3-leader Yohan Rossel. Rossel has a 16.3 second advantage over Spain’s Pepe López in WRC3, who is tenth overall at the end of day 1. Adrien Fourmaux damaged the suspension of the Ford Fiesta Rally2 in SS2 and later slid wide, forcing him to retire.