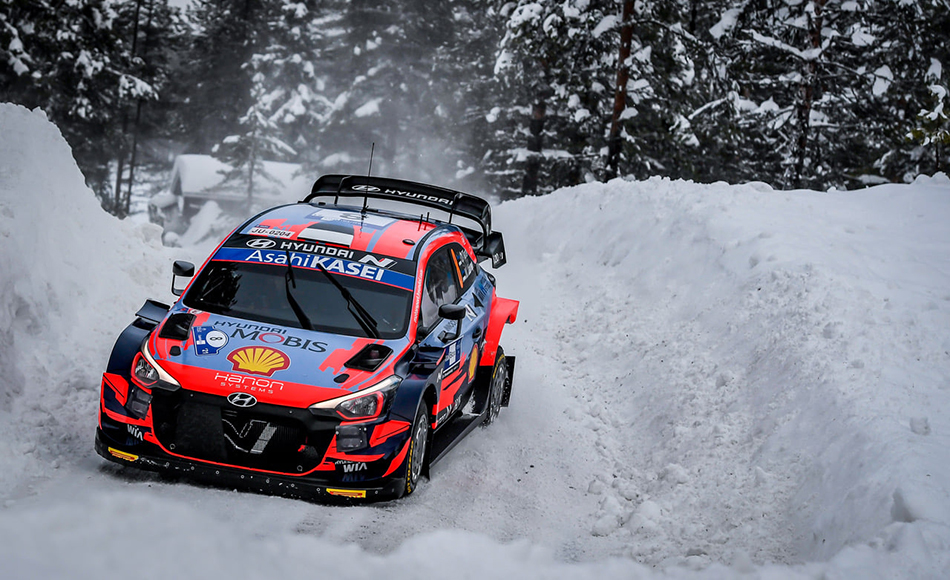 Estonia’s Ott Tänak has a 24.1 second advantage over Kalle Rovanperä going into the final day of Arctic Rally Finland. Thierry Neuville moved up a place to be third after Saturday’s stages.

Day 2 of the Arctic Rally Finland is the longest day of the event with 6 stages and just over 144 kilometres against the clock. Ott Tänak got off to a flying start early this morning by winning SS3, albeit by just 1 second over his team-mate Thierry Neuville. Then in SS4, Elfyn Evans won the stage out of somewhat nowhere, as the Welshman was only ninth in the opening stage of the day. Tänak went on to win the final stage of the first loop with just 1 tenth margin over Evans.

Thierry Neuville said he had intercoms problems in the first loop of the day. Resulting in him not being able to properly understand the notes from his co-driver Martijn Wydeaghe. “I struggled to clearly understand the notes. I tried to be focussed and do my job – we did the best we could this morning.”, the Belgian said at the end of SS5.

Lorenzo Bertelli went off the road in a fast section in the first stage of the day. The Italian and his co-driver Simone Scattolin were stuck in a snowbank and didn’t manage to get out.

Tänak kept his lead over 20 seconds in the second loop of the day. The 2019 World champion won the first stage of the afternoon by just 2 tenths over Neuville. Only Rovanperä could somewhat match the pace of Tänak and Neuville, as the young Finn was 1.4 seconds slower than Tänak. Suninen was fourth in SS4, but dropped 11.2 seconds to Tänak. Craig Breen lost 13.9 seconds in SS6 and dropped to fourth overall behind Neuville.

Pierre-Louis Loubet’s Hyundai had turbo issues in SS6 and had to drove slowly. The Frenchman was forced to retire the car for today in the road section between SS6 and SS7.

Rovanperä won SS7 by 1.7 seconds over Tänak. Evans was third (+3.8) and Neuville fourth (+5.0). The Belgian said at stage-end that the communication with his co-driver was “working better”: “I had a very clean and smooth run trying to save my tyres and it was working well.”

Oliver Solberg lost 10 seconds in SS7, as the young Swede spun after hitting a snowbank. Solberg was able to continue without any issues but lost a place in the overall standings to Ogier.

Solberg overtook Ogier in SS8 as the seven-time World Champion went off the road in the final stage of the day. Ogier was stuck in a snowbank but eventually managed to get out and finish the stage, albeit 20 minutes off the stage winning time. “[At] the last real corner. We went a little bit too sideways and caught the bank. It’s a shame, but it’s a weekend to forget.”, Ogier explained.

Neuville had blistering pace and won SS8 by some margin. The Belgian was 12.3 seconds faster than Tänak, who was second fastest in the 27.68 km long test. Rovanperä was third fastest in SS8 and kept his second place overall, only just, as Neuville closed the gap to 1.8 seconds between him and Rovanperä at the end of day 2.

Esapekka Lappi moves up into the top 10 after Ogier’s off. The Finn leads comfortably in WRC2 and has a 49.8 second lead over Andreas Mikkelsen. Teemu Asunmaa leads the way in WRC3. Emil Lindholm, who was leading in WRC3, crashed in SS4.