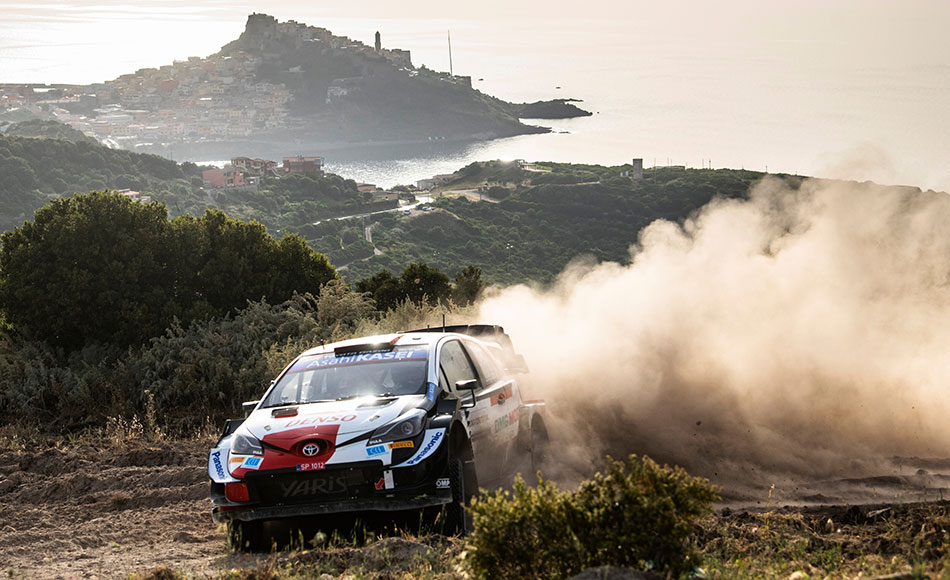 Sébastien Ogier has won Rally Italia Sardegna for the fourth time in his career. The Frechman consolidated his lead on the final day to extend his advantage in the championship.

Every driver restarted on Sunday except Pierre-Louis Loubet. Many driver cruised through the stages to save their tyres for the Power Stage.

Elfyn Evans won the opening stage of the stage. Thierry Neuville lost 11 seconds to the Welshman through the 15.25-kilometre long test, which meant that the Belgian was now over half a minute behind Evans.

The battle for the WRC2-win was close between Mads Østberg and Jari Huttunen. Huttunen started the day with a 2.7 second advantage over Østberg, but dropped behind the Norwegian after the opening stage.

Then, in the next stage, Østberg got a front left puncture and was livid at stage end: “I’m so f****** annoyed, all the things happening all the time. These f****** s*** tyres, I touched absolutely nothing, straightaway I have a puncture. F****** hell.“

Østberg was now 17.4 seconds behind Huttunen thanks to the puncture. In the penultimate stage however, Østberg pushed hard and made up a massive 15.3 seconds to Huttunen to close the gap to 2.1 seconds with one stage to go.

Sébastien Ogier meanwhile consolidated his overall lead. The Frechman had a 32.9 seconds advantage over Evans with one stage to go. Thierry Neuville was third, still over a minute behind Ogier.

Sébastien Ogier was fourth fastest in the Power Stage but more importantly won the rally to extend his lead in the championship. Dani Sordo gathered the final point from the Power Stage.

Elfyn Evans ends Rally Italia Sardegna in second overall despite late drama in the Power Stage. Evans’ Toyota stalled after a watersplash and stopped. The Welshman dropped 18.3 seconds and kept his second place with Thierry Neuville in third. Takamoto Katsuta ends the rally in fourth.

Jari Huttunen won the WRC2-category by holding off Mads Østberg by 7.5 seconds. Østberg suffered brake issues in the Power Stage and couldn’t outpace Huttunen to reclaim the WRC2 lead.

Yohan Rossel got the lead in WRC3 from the final stage of Friday onwards and never left first place. The Frenchman ends in P7 overall with his WRC3-rivals Pepe López and Jan Solans in P8 and P9 respectively. Marco Bulacia rounds of the top 10 despite a roll in SS18 this morning.

Ogier extends his championship lead with his third win of the season. The seven-time champion now has 106 points, that’s 11 points more than Elfyn Evans. Thierry Neuville keeps third in the championship with 77 points.

Ott Tänak keeps fourth place but has less than half of Ogier’s points with 49 in total. Takamoto Katsuta is up to fifth in the standings, one point behind Tänak and 4 points more than Kalle Rovanperä. Full championship standings below.

Next up: WRC Safari Rally Kenya!

WRC Drivers’ Championship standings 2021 after Round 5

WRC Manufacturers’ Championship standings after Round 5