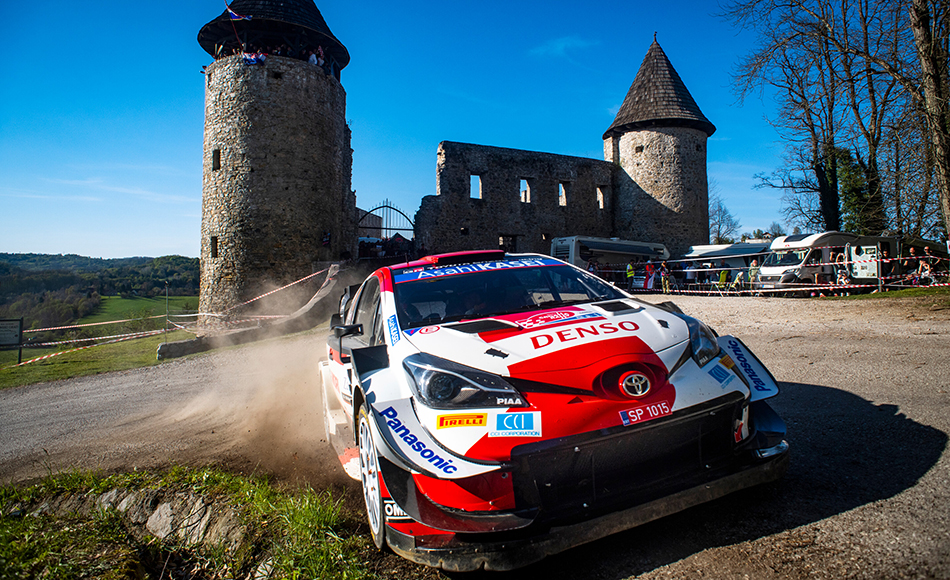 Sébastien Ogier has won Croatia Rally in a bizarre final day. The seven-time World Rally Champion won the rally despite a incident on the road section on Sunday morning.

The day started of with a road section incident for Sébastien Ogier. On his way from service to the start of SS17 (first stage of the day), the Frenchman collided with another car. Ogier’s Yaris WRC was damaged on the right-hand side, but managed to continue and start SS17 on time. Elfyn Evans won SS17, with Neuville 1.4 seconds behind the Welshman. Ogier (only) lost 2.7 seconds and kept his lead.

Video of Ogier’s incident on the road section before SS17. #WRC #CroatiaRallypic.twitter.com/LbWrgJLzRD

Evans continued to show good pace in SS18 as he took another stage win, this time 3.5 seconds faster than Neuville and 7 seconds faster than Ogier. Last year’s championship runner-up jumped Ogier in the overall standings with a 2.8 second advantage.

Neuville won the penultimate stage by 4 tenths over Evans. Ogier lost 1.5 seconds to Neuville. With only the Power Stage to run, Evans had a 3.9 second lead over Ogier and 8 seconds over Neuville.

Craig Breen was the second WRC-car in the Power Stage but managed to set a very competitive time. The Hyundai driver was still fastest when the top 3 went into the stage. Neuville was first to complete but couldn’t match Breen’s time as the Belgian clocked 1 second slower. Sébastien Ogier showed blistering pace despite his damaged Yaris to go quickest by 3 seconds over Breen. Evans was yet to complete but was down on Ogier’s split times. Ultimately Evans completed the stage 4.5 seconds behind Ogier which meant the seven-time World Champion pipped Evans by 6 tenths of a second to win Croatia Rally in dramatic fashion.

Neuville completes the podium just 8.1 seconds behind rally-winner Ogier with his Hyundai team-mate Ott Tänak in fourth place. M-Sport’s Adrien Fourmaux WRC-debut ends in a strong fifth place finish. The Frenchman lost 1 minute in SS18 after a slight off-road excursion, but managed to continue with the help of spectators.

Takamoto Katsuta ends Croatia Rally in sixth place ahead of Gus Greensmith and Craig Breen. WRC2-winner Mads Østberg finishes in P9 overall ahead of Teemu Suninen. Marco Bulacia completes the WRC2 podium thanks to an off for Nikolay Gryazin in the penultimate stage. Kajetan Kajetanowicz wins the WRC3-category in Croatia ahead of Lindholm and Rossel.

Ogier has retaken the lead in the championship thanks to his Croatia Rally win. The Toyota driver leaves Croatia with 61 points behind his name. Neuville is still second with 53 points. Evans isn’t far behind Neuville with 51 points. Arctic Rally Finland winner Ott Tänak moves up one place to P4. Tänak has 1 point more than Kalle Rovanperä who keeps on 39 points. Rovanperä drops from the championship lead to P5 this weekend.

Toyota increase their lead in the manufacturers championship thanks to a strong 1-2 finish this weekend. Hyundai is now 27 points behind Toyota after round 3.

WRC Drivers’ Championship standings 2021 after Round 3

WRC Manufacturers’ Championship standings after Round 3