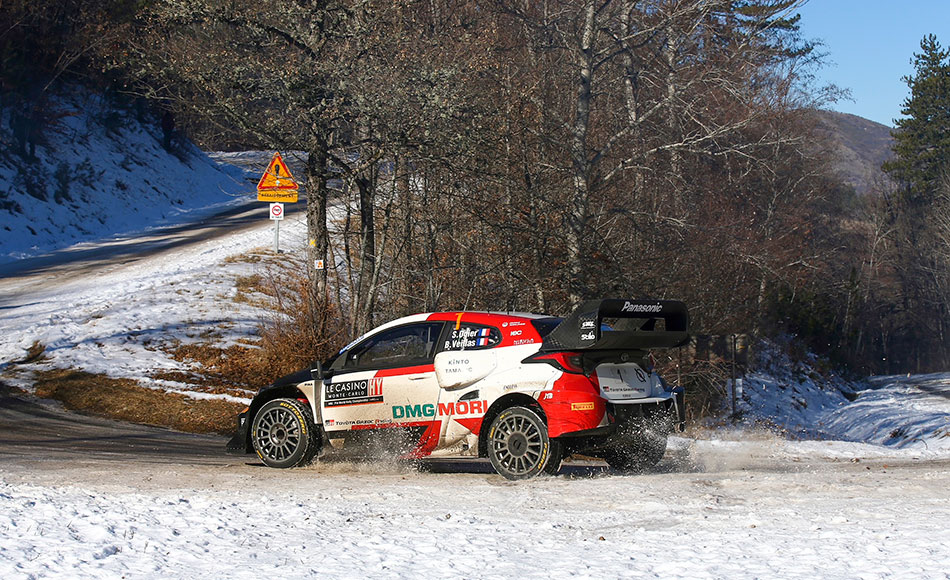 Sébastien Ogier is the leader heading into the final day of Rally Monte Carlo. The Toyota driver holds a 21.1-second advantage over Sébastien Loeb.

Elfyn Evans won the opening stage of the day by seven-tenths over Rovanperä and 3.9 seconds over Ogier to close the gap for P2 with his teammate to 8.2 seconds overall.

Ogier reacted in the following stage to go fastest by 1.1 seconds over Evans and 5.2 seconds over Rovanperä. The Toyota’s showed great pace with two 1-2-3’s in a row. Loeb dropped 2.4 seconds and 6.5 seconds to Ogier in the opening two stages respectively, which meant that after SS10, Loeb and Ogier were joint leaders of the rally with Evans 9.3 seconds behind in third.

Evans showed blistering split times in the mixed (icy/snow/dry tarmac) stage (SS11). However, the Welshman went too hot into a right-hander in the downhill section towards the finish which resulted in him going wide and beaching his GR Yaris off the road. The stage was red flagged after Loeb to recover Evans’ car. Meanwhile, Ogier was flying and won the stage despite a very hot moment in the slippery part of the stage where he just managed to keep his car on the road. Loeb lost 5.4 seconds to Ogier to end the morning loop the same amount of time behind his rival.

Rovanperä stars in the afternoon loop

Kalle Rovanperä struggled for pace all day yesterday but recovered very strong today. The two-time rally winner took stage wins in both stages in the afternoon to climb up to fourth place overall at the end of the day.

Loeb was four-tenths faster than Ogier in the first stage after the break (SS12) but lost 16.1 seconds in the rerun of the Sisteron stage. Loeb gambled for a super soft/soft combination for the mixed condition’s stage which Ogier admittedly copied. Ogier’s initial plan was to run snow tyres: “I was planning to go with the snow tyres because it was the safest option, but I saw that Séb [Loeb] was going for slicks, so I quickly changed at the last minute before the start.”, Ogier said.

Running the same compound as Loeb paid off for Ogier as he ends the day with a 21.1-second lead. However, a tyre combination with studs seemed the faster option courtesy of Rovanperä stage win, five seconds up on Ogier.

Hyundai struggles throughout the day

The Toyota’s showed great pace on Saturday as the Japanese-Finnish team won all five stages today. It’s a different story for Hyundai as they struggled throughout the day. Tänak picked up a puncture in the opening stage and gambled in the first pass through Sisteron with a super soft/soft tyre combination. The Estonian went wide in an icy section and hit the wall. He managed to complete the stage but was forced to retire for the day on the road section.

Oliver Solberg went wide in stage 10 and lost 35 minutes in the process.

Thierry Neuville struggled with damper issues throughout the day. In SS12, the damper on the front-right came through the bonnet which meant he lost just under four minutes. In the following stage, he lost another minute despite a quick fix on the liaison. Neuville ends the day in sixth, almost eight minutes off the lead.

Craig Breen had a day in no man’s land. The Irishman is third overnight, over a minute behind Loeb and 37.8s ahead of Rovanperä. Gus Greensmith struggled with power issues which led to a three-minute time penalty for being late at the SS11 time control. The M-Sport driver ends the day in fifth ahead of Neuville and WRC2 leader Andreas Mikkelsen.

Mikkelsen leads the WRC2 category despite a puncture change in the final stage. Erik Cais is eight overall ahead of Grégoire Munster and Yohan Rossel. Rossel lost a lot of time in the final stage as well after being stuck in a ditch for almost three minutes.

Takamoto Katsuta dropped out of the top 10 as he went off the road in the snowy section of the final stage. He’s thirteenth, 70 seconds behind Rossel in tenth.

The final day of Rally Monte Carlo consists of four stages. These four stages bring the total amount of competitive kilometres to 67.26. SS14, the opening stage of Sunday, gets underway at 08:45.