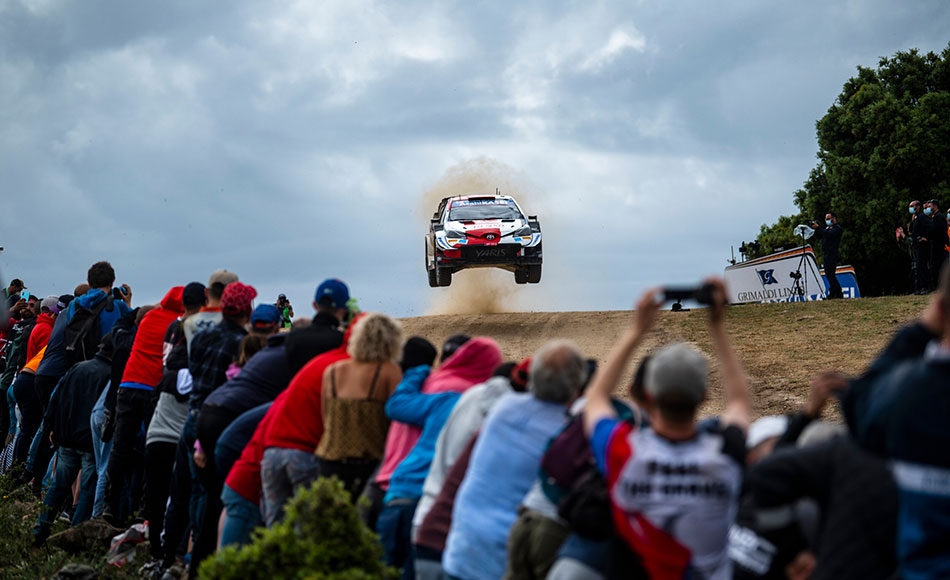 Sébastien Ogier leads Rally Italia Sardegna at the end of day 2. The seven-time World Rally Champion has a 38.9 second advantage of his Toyota teammate Elfyn Evans.

Tänak’s day started of very well as the Estonian won SS9. Dani Sordo had an engine stall after a watersplash and dropped a massive 15.4 seconds in the stage. It meant that Tänak’s lead was up to 34.8 seconds over Sordo, with Ogier in P3, 42.3 seconds behind the 2019 World Champion.

Sordo continued to struggling in the morning and dropped behind Ogier after SS10. Ogier won the stage ahead of Tänak who admitted he had taken it a bit easier.

Elfyn Evans won the following stage by just 2 tenths over Ogier and three tenths over Tänak who consolidated his lead.

In SS12 however, disaster struck for Tänak. He hit an unavoidable rock in a fast section and had to pull over to the side of the road. The Hyundai driver was forced to retire with rear-right suspension damage. It’s the second rally weekend in a row that Tänak retires from the lead of the rally.

Ogier won SS12 meanwhile and inherited the lead of the rally. Sordo was second overall at mid-day, 17.5 seconds behind Ogier. Elfyn Evans was up to third with Thierry Neuville in P4, 8.5 seconds behind Evans.

M-Sport’s Gus Greensmith restarted today after retiring yesterday with a transmission issues. The young Brit had to retire for the second time in SS12 due to mechanical issues. Pierre-Louis Loubet was also forced to retire in mid-day service with an unknown issue.

Sébastien Ogier increased his gap to Sordo steadily by winning SS13, SS14 and SS15 after the mid-day break. More drama unfolded for Hyundai in SS15 as Dani Sordo crashed out from second place overall. Sordo’s error promotes Evans to second and Neuville to third. Ogier’s lead was now up to over 40 seconds and admitted it puts a little less pressure on him: “It’s a shame for him [Sordo] for sure. At the same time, now we can relax more.“, the Toyota driver said.

Elfyn Evans won the final stage of the day to increase his advantage over Neuville slightly to 22.7 seconds. Ogier leads the rally by 38.9 seconds at the end of the day. Takamoto Katsuta is fourth overall with a huge gap of over 4 minutes to fifth placed Huttunen. Only four WRC-cars are in the top 10 at the end of the day, demonstrating how tough this rally is.

Huttunen leads Østberg by 2.7 seconds in WRC2 at the end of the day. Yohan Rossel still leads the WRC3-category and is seventh overall. Pepe López is second in WRC3 and eighth overall, 37.8 seconds behind Rossel. Jan Solans is 9.7 seconds behind López in ninth overall. Marco Bulacia rounds of the top 10 standings in sits in third overall in the WRC2-category.