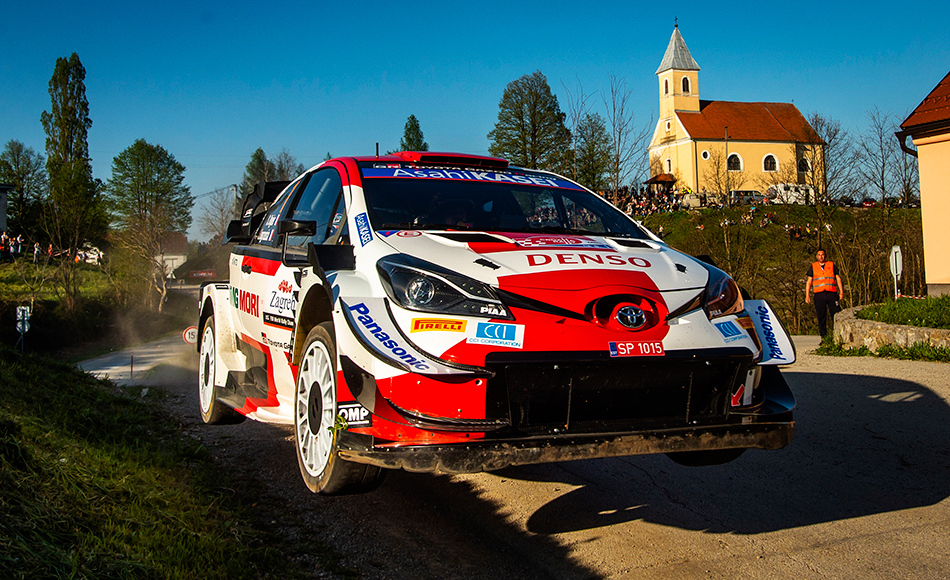 It’s tight at the top at the end of Day 2 at Rally Croatia, as only 10.4 seconds covers the podium places with one day to go.

Saturday started off far from ideal for Hyundai’s Craig Breen, as the Irishman got a puncture at the start of the opening stage. “I had to stop and change it.” Breen lost over two minutes, which dropped him from fifth overall to ninth.

There was more trouble for Hyundai as Thierry Neuville dropped 12 seconds due to a wrong tyre choice in the first stage: “I couldn’t keep the rear in the line.” said the Belgian. Neuville lost another 11.2 seconds to Ogier in the second stage of the day. Which meant that the Hyundai driver was now 15 seconds behind Ogier after the first two stages, despite leading the rally going into the day by 7.7 seconds.

The final two stages of the first loop went a bit better for Neuville. However, at the end of the morning loop, he was now in P3, 19.6 seconds behind Ogier. Elfyn Evans was in second place, 7 seconds behind Ogier. Ott Tänak’s pace was better than Neuville’s in the morning loop, but couldn’t outpace the Toyota’s to close the gap and thus still was P4 overall. Adrien Fourmaux, who almost won his first WRC-stage in the opening stage of the day, was P5 for M-Sport.

Fourmaux got off to a flying start in the first stage of the loop again, as he was just 1.1 seconds shy of a stage win. Neuville made a statement to win the stage, with Ogier and Evans both losing 10 seconds to Neuville. Ogier dropped time due to a puncture, as Evans said he was “just not brave enough.” to match Neuville’s pace.

The Belgian’s blistering pace meant he halved the gap with rally-leader Ogier in one stage. Ogier, Evans and Neuville were very evenly matched in the remaining stages of the day. At the end of Day 2 it’s all to play for with the top 3 just 10.4 seconds separated from each other. Ogier holds a 6.9 second lead over his team-mate Elfyn Evans, with Thierry Neuville only 3.5 seconds behind Evans in third.

Ott Tänak is fourth overall in his Hyundai, 37.8 seconds off the leader Ogier. The M-Sport cars of Adrien Fourmaux and Gus Greensmith are P5 en P6 respectively with Toyota’s Takamoto Katsuta in P7.

Katsuta had very strong pace today, as the Japanese driver won both passes through the Stojdraga – Gornja Vas stage. Despite the strong pace, Katsuta only moved up one place due to an off for Pierre-Louis Loubet in SS14.

Loubet’s off meant that also Craig Breen moved up one place to be P8 overnight. WRC2-leader Mads Østberg is P9 overall and has a big lead of more than 1 minute over his nearest WRC2-rival Teemu Suninen. Nikolay Gryazin was in tight battle with Østberg till SS13, but the Russian dropped to P3 due to power steering problems with his Volkswagen.

British driver Jon Armstrong leads the JWRC at the end of Day 2. Amstrong defends a 22.5 second advantage over Finland’s Lauri Joona. Latvia’s Martins Sesks is only 5.2 seconds behind Joona in P3.

A serious day of rallying remains for the final day in Croatia. There are 2 different stages, who will both be run twice. There are still 78.58 competitive kilometres to run tomorrow. Don’t miss anything and follow the action via our Twitter or Facebook pages!