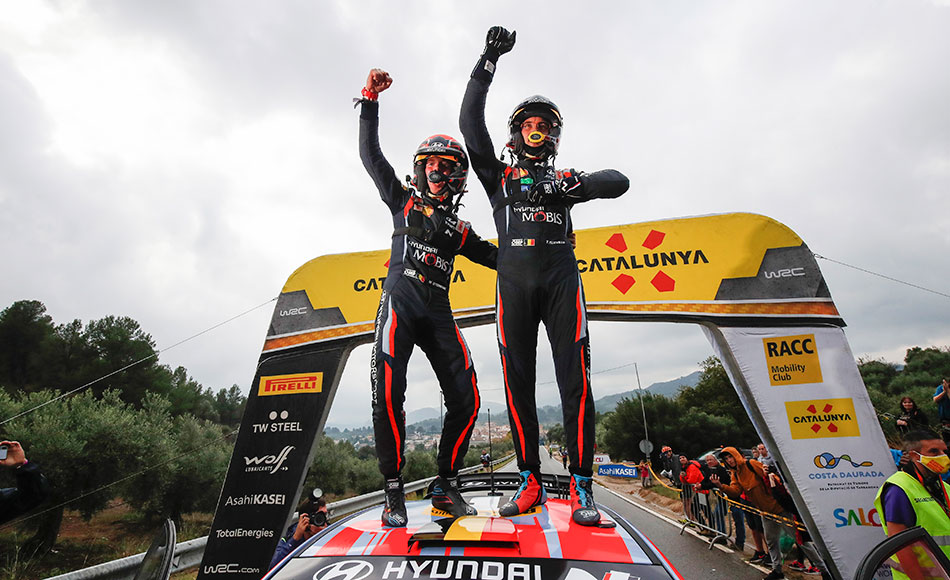 Thierry Neuville and co-driver Martijn Wydaeghe have won WRC Rally Spain on Sunday. The duo survived late starting problems into the regroup before the final stage.

All was well under control for Neuville until the regroup before the final stage. Starting problems meant that the car had to be pushed into regroup.

Neuville managed to get the car running out of regroup in time and drove towards the start of the Power Stage. The Belgian completed the Power Stage second fastest: “Relieved to be at the end. It was a tough weekend but we fought very hard. We had a good clean run and until near the end everything was perfect.”, said the Belgian at the end of final stage.

Neuville continued: “Unfortunately lots of stress before the last stage, again. I am really disappointed about that because otherwise the weekend would have been perfect and nice, but now it isn’t. I don’t know what to say to be honest.”

Dani Sordo won all stages on Sunday and beat Sébastien Ogier for the final podium spot. In the end, Sordo finishes 6.8s ahead of the championship leader.

The Driver’s and Manufacturer’s titles are to be decided at the season finale at Rally Monza. Ogier had to outscore Evans by six points this weekend to claim the title in Spain. However, Evans managed to gain seven points to Ogier. It means that Ogier heads the championship standings by 17 points into the season finale in Monza.

Toyota needed to not be outscored by more than nine points by Hyundai to seal the Manufacturers’ title in Spain. Hyundai take 45 points away from Spain thanks to a 1-2 in the Power Stage, which is ten points more than Toyota’s 35. Meaning that the Toyota misses out to be crowned champion by a single point.

Eric Camilli won the WRC-category at Rally Spain. In WRC3, Emil Lindholm won took victory ahead of Kajetan Kajetanowicz. Sami Pajari won the final round of the JWRC season in Spain to win the 2021 title. The 19-year old is the younest driver ever to win the championship, as well as the first Finn.

WRC Manufacturers’ Championship standings after Round 11/12