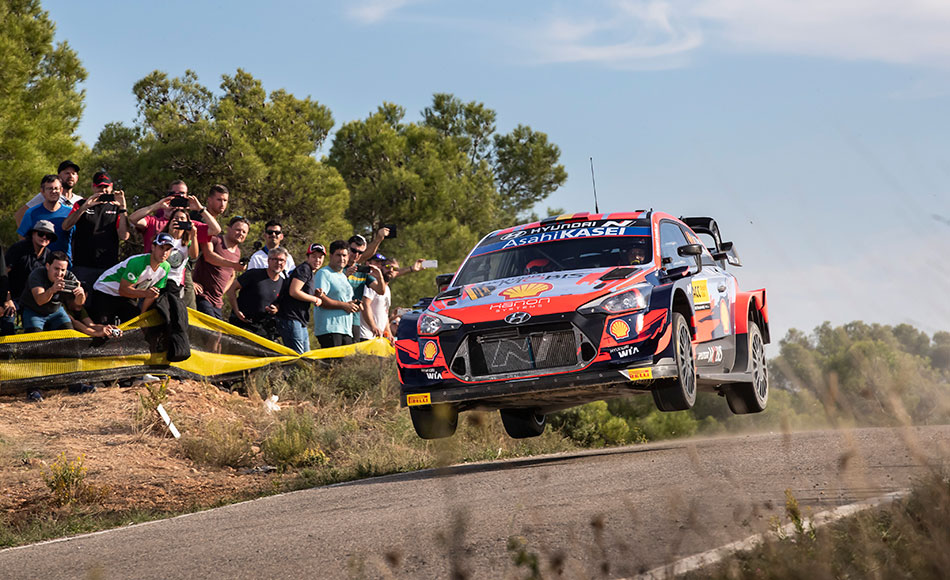 Day 1 on Rally Spain consisted of six stages with a total of 112 competitive kilometres. The event is now an all-tarmac rally after a rule change banned mixed surface events.

Elfyn Evans got off to a flying start. The Welshman won all three stages of the first loop to lead by 7.9 seconds at the lunch break. Thierry Neuville set an identical time to Evans in SS2 and was second overall at mid-day. Evans’ team mate and championship rival Sébastien Ogier was third, 12.6 seconds off the lead.

Toyota’s Takamoto Katsuta crashed in SS1. The Japanese driver went too fast into a tightening right-hander, which meant that he hit an armco barrier on the left hand side. Katsuta managed to finish the stage, but eventually had to retire on the road section due to extensive damage.

Neuville repeated what Evans had done in the morning loop: win all stages of a loop. The Belgian won all three stages in the afternoon. His stage win in the new La Granadella (SS5) stage was impressive, as he won the stage by a 7.9 second margin over the nearest driver. In SS4 and SS6, Neuville and Evans were separated by only 0.3 and 0.4 seconds respectively.

At the end of day 1, Neuville leads by just 0.7 seconds over Evans. Ogier is third, 19.4 seconds adrift of Neuville.

Ott Tänak went off the road in SS4 this afternoon. “We probably carried a bit too much speed into the corner, locked the wheels in a dirty place and all this together was too much to save the situation.”

Tänak’s stranded Hyundai i20 Coupé WRC after his off in SS4: (Foto Twitter: @OttTanak)

Tänak and co-driver Martin Järveoja were OK. Hyundai confirmed on Friday evening that the crew won’t restart tomorrow, as the chassis was too damaged to continue.

Dani Sordo ends day 1 just off the podium places in P4, 5.4 seconds behind Ogier. Kalle Rovanperä is fifth overnight, 38 seconds off the lead. M-Sport Ford-drivers Adrien Fourmaux and Gus Greensmith are sixth and seventh overall respectively, over a minute behind Neuville.

Oliver Solberg focused on gaining experience during his first day in a WRC-car on a WRC tarmac rally. The 20-year-old is eighth overall after day 1, just under two minutes off the lead. Nil Solans ends his first day at the top level of the sport in P9 (+2:30.5). WRC2-leader Eric Camilli concludes the top 10. The Frenchman has a 5.7 second advantage over WRC3-leader Emil Lindholm in the battle for the fastest Rally2/R5-driver. Jon Armstrong leads the JWRC field after day 1. JWRC championship leader Sami Pajari is second, 15.9 seconds behind Armstrong.