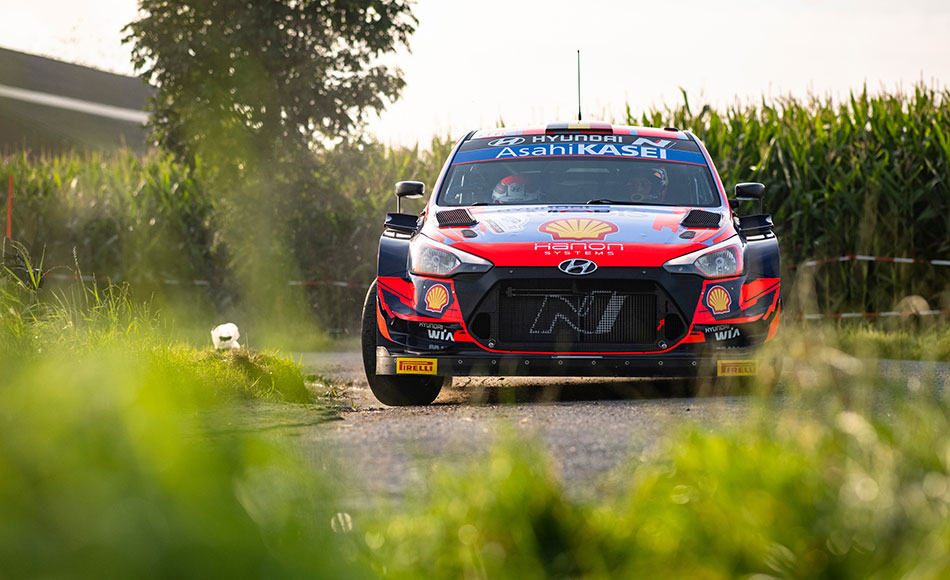 Thierry Neuville leads WRC Ypres Rally Belgium at the end of day 1. Craig Breen is 7.6 seconds behind the Belgian in second.

The pair could barely be separated during this afternoon’s opening loop of four speed tests through narrow asphalt farm lanes, which Neuville ended 0.4sec to the good in his i20 World Rally Car.

Fastest times on all three evening special stages (the final test was cancelled for safety reasons) delivered the Belgian a 7.6sec lead with two days remaining of this eighth round of the FIA World Rally Championship. Ott Tänak completed a Hyundai podium lockout in third.

Neuville’s only problem was a bizarre one. His trademark spectacles slipped down his face in the afternoon’s action, disrupting his concentration but clearly not slowing his pace.

“The target this evening was the same as this morning – just to have a clean run through,” said Neuville. “My gravel crew has done a good job so I felt comfortable to drive a little bit faster and extend the lead. We are in a good rhythm and that’s important.”

Tänak led after the opening test but an overshoot in the next allowed his two colleagues to break clear. Breen led for two stages before Neuville edged clear and the Irishman could not match his team-mate’s pace in the repeat loop.

“The lead has gone out a little bit, but I have to be pleased with how the day has gone,” Breen said. “We knew it would be a challenge to try and match Thierry here, so after 130km of stages to be only seven seconds behind, we have to be quite happy with that.”

Tänak headed a thrilling four-car fight for third with the quartet blanketed by 8.2sec. The Estonian’s car was down on power this evening but he had enough speed to repel Kalle Rovanperä, who headed a four-car Toyota Yaris train in fourth.

Rovanperä was 1.4sec adrift and just eight-tenths clear of Elfyn Evans, who he demoted in the final stage. Evans was frustrated, happy with the feeling he had behind the wheel but dismayed at his times.

Championship leader Sébastien Ogier completed the top six. He lost valuable seconds with a front left puncture this afternoon and was uncomfortable with his car’s set-up. Changes at the mid-leg service left the Frenchman in a happier frame of mind after the evening action.

It was a disastrous opening for M-Sport Ford. Adrien Fourmaux retired in SS3 after clipping a bank and launching his Fiesta into a huge airborne spin, while Gus Greensmith exited just 200 metres after the start of the next stage when he dropped his car into a ditch.

Saturday’s leg features another compact day south of Ypres covering 119.92km of stages. Four morning tests beginning with Hollebeke, at 25.86km the longest of the rally, are repeated in the afternoon.