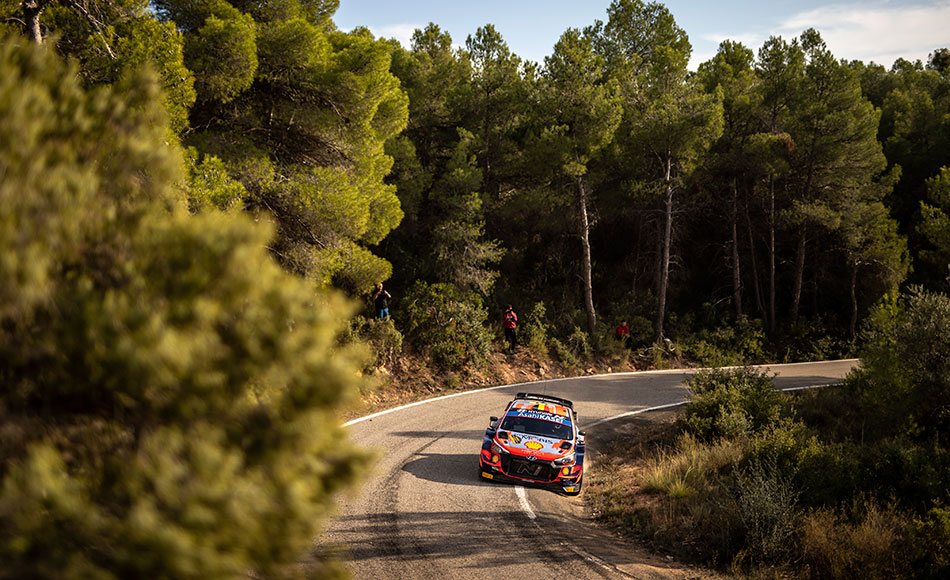 Thierry Neuville leads WRC Rally Spain at the end of the day 2 by 16.4 seconds over Elfyn Evans. The Belgian won six of the seven stages today.

Neuville carried over his strong pace from Friday afternoon to Saturday. The Hyundai driver won all stages of the Saturday morning and led the rally by nine seconds despite struggling with understeer. Meanwhile, Neuville’s Hyundai team mate Dani Sordo pressured championship leader Sébastien Ogier. The Spaniard closed the gap for P3 to just two tenths at the mid-day break.

In the opening stage of the afternoon loop, SS10, Neuville continued doing what he did in the morning: win stages. Ogier was second fastest through the Savalla stage. Ogier’s pace bettered in SS11 as he and Neuville were joint fastest thourgh Querol – Les Pobles stage. Both Evans and Sordo dropped a couple of seconds to their nearest rivals. Ogier continued to show stage winning pace in SS12, as his time was 1.2s faster than Neuville’s and 1.3s faster than Sordo’s. The seven time WRC champion had gradually increased his advantage over Sordo to 6.9 seconds.

However, most of the hard work was undone in the final Salou show stage. Ogier stalled his car at a hairpin and lost 5.7s to Sordo in the 2.15-kilometre stage. At the end of day 2, Ogier holds a 1.2 second advantage over Sordo in the battle for P3.

At the front, Neuville is in full control. The Belgian holds a 16.4 second lead over Evans, with Ogier in third and Sordo in fourth. Kalle Rovanperä couldn’t match the pace of the leaders and sits in P5, over a minute behind leader Neuville.

Gus Greensmith dropped more than a minute in SS9 due to a puncture. But was promoted to sixth in the final stage of the day as Oliver Solberg suffered clutch issues. Solberg Jr. dropped 33.1 seconds in the Salou stage. Adrien Fourmaux dropped out of the top 10 as he punctured in SS11 after clipping a armco barrier. The Frenchman then had trouble get his car running, meaning he lost more than 10 minutes as a results of the issues.

Nil Solans is in P8 overnight, 7.9s behind Solberg and almost four minutes ahead of WRC2-leader Eric Camilli in ninth. Nikolay Gryazin rounds off the top 10, 9.7s behind Camilli. WRC3-leader Emil Lindholm is eleventh overall. Lindholm can’t score WRC3 points as he has already started the maximum of seven rallies this season. The Finn is entered as his co-driver Reeta Hämäläinen, however, Lindholm is the person driving the car.

In JWRC, Sami Pajari leads. Pajari’s main championship rival Jon Armstrong crashed out in SS11. The Finn is in a prime spot to be crowned JWRC champion tomorrow.