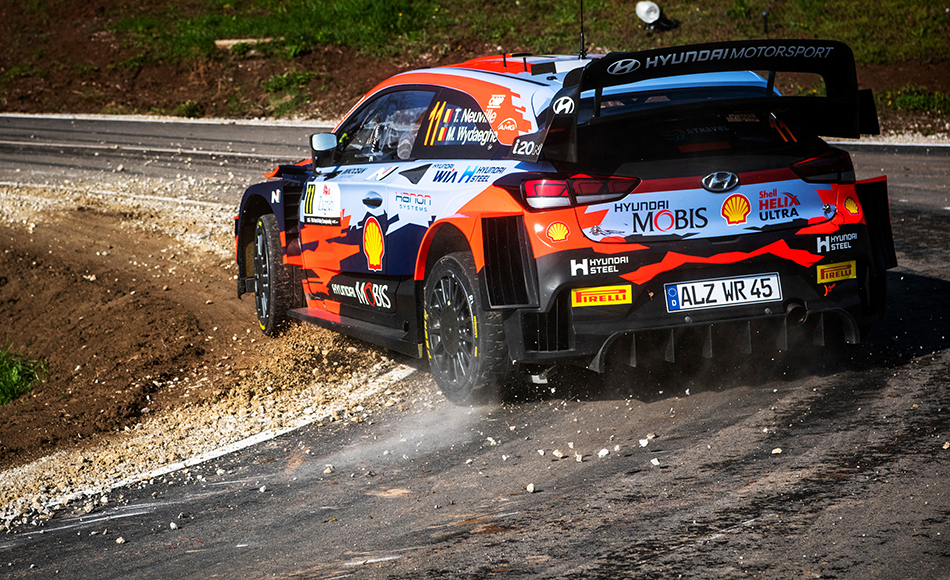 Neuville won three of the four stages in the opening loop, but only had a 7.3 second advantage over Evans at the lunch break. All drivers found the conditions tricky to tackle. Championship leader Kalle Rovanperä was first on the road this morning. The young Finn was introduced to the difficult conditions in dramatic fashion, as the Toyota driver understeered off the road into the trees in a fast right hander in SS1. “The whole opening stage was super splippery and we we were struggling with a lot of understeer. I still tried to push, but on this fast right hander grip just completely dissapeared.” Rovanperä explained. Toyota confirmed that the sustained damage is too big to repair and therefore Rovanperä won’t restart tomorrow.

Sébastien Ogier was third overall after the first loop, 12.3 seconds behind Neuville and 13 seconds ahead of Ott Tänak who couldn’t match the pace of the top 3. “The surface is so strange here. Even now, it’s dry but we can’t get the tyre working.” said the Estonian.

Small margins remained for the second loop as the day ends with the top 3 (Neuville, Ogier, Evans) in a close battle going into tomorrow. Only 8 seconds separates the podium place after day 1. Ott Tänak, who won the opening stage of the second loop, is fourth for Hyundai. Tänak is followed by the third Hyundai of Craig Breen. Adrien Fourmaux is the leading M-Sport Ford in sixth on his World Rally Car debut. Fourmaux, who says he’s not taking risks, has a 9.8 second advantage over his team-mate Gus Greensmith.

Pierre-Louis Loubet is eight after the first day in his Hyundai. Takamoto Katsuta is P9, almost a minute behind Loubet thanks to a few small mistakes during the day.

WRC2-leader Mads Østberg completes the top 10 in his Citroën C3 Rally2. The Norwegian holds a 7.8 seconds lead over Nikolay Gryazin in the Volkswagen Polo R5. Teemu Suninen slid of the road in SS4 but managed to continue and is third in the WRC2 standings after day 1.