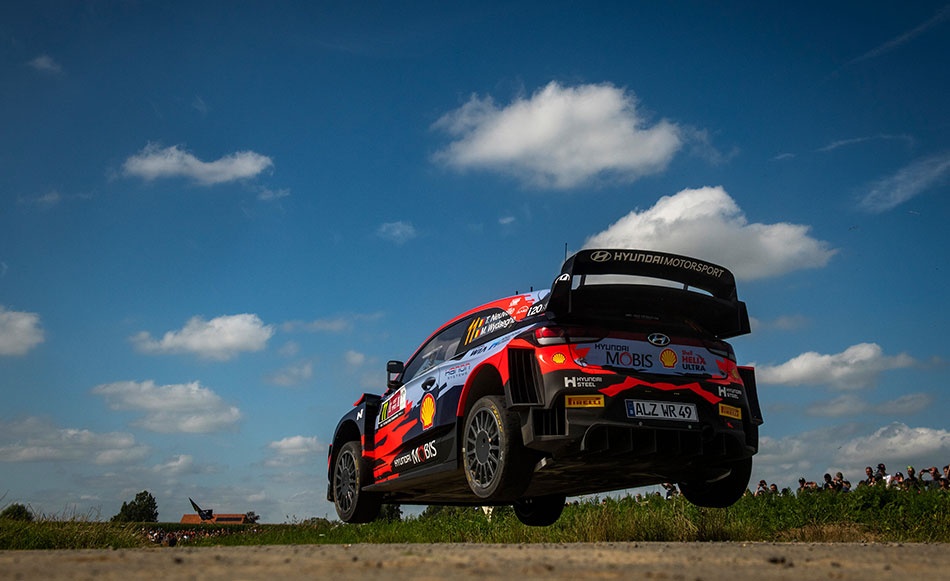 Thierry Neuville leads Ypres Rally Belgium on home soil with one day to go. The Belgian defends an 10.1 second advantage over his Hyundai team-mate Craig Breen.

After Friday’s frantic fight in Flanders’ asphalt farm lanes, after which they were separated by 7.6sec, the pair were again in a class of their own on narrow fast roads south of Ypres.

Breen threw down the gauntlet to win the opening two speed tests and trim the deficit to 3.5sec. Neuville fought back to beat the Irishman in the next two and reach mid-leg service with his lead up to 6.8sec.

He added two more stage wins this afternoon compared to Breen’s one, extending his advantage as the Hyundai drivers appeared content to hold position while a trio of Toyota Yaris cars fought for the final podium place behind.

“We knew it was a challenging day and there’s one more to come tomorrow in a different area and different kind of stages,” said Neuville. “Nothing is done yet, but a big part of the rally has been managed by us very well so far. Of course, it’s always nice when you go more flat out, but we have to manage and be clever.”

Hyundai restarted with a podium lockout, but Ott Tänak dropped three minutes in the opening test stopping to change a puncture. A faulty jack added to the Estonian’s woes as he plunged to sixth.

Instead Elfyn Evans, Kalle Rovanperä and championship leader Sébastien Ogier battled all day for third and were covered by 4.3sec at the close. Welshman Evans won one morning stage and Ogier scored two fastest times this afternoon.

Evans finished more than half a minute adrift of Breen but with a crucial 3.3sec in hand over Rovanperä. Ogier was unhappy on dirty roads this morning, but felt more comfortable this afternoon and closed to within 1.0sec of the young Finn.

Toyota’s challenge was down to three after Takamoto Katsuta crashed heavily in the morning Dikkebus stage. The Japanese driver hit a bump in a fast corner, which threw his Yaris into a ditch. It pirouetted through the air and hit an electricity pole before a violent landing. He and co-driver Keaton Williams were unhurt, but their rally was over.

Pierre-Louis Loubet also retired when the Frenchman drifted wide into a ditch on the exit of a tight right corner in Hollebeke and his i20 could not be retrieved.

The focus switches 300km east for Sunday’s finale at the Spa-Francorchamps race circuit, near the German border. Two identical stages are driven twice, covering 40.52km, mixing country roads with iconic track sections such as Eau Rouge, Raidillon and Malmedy. The rally ends with bonus points available in the Power Stage.