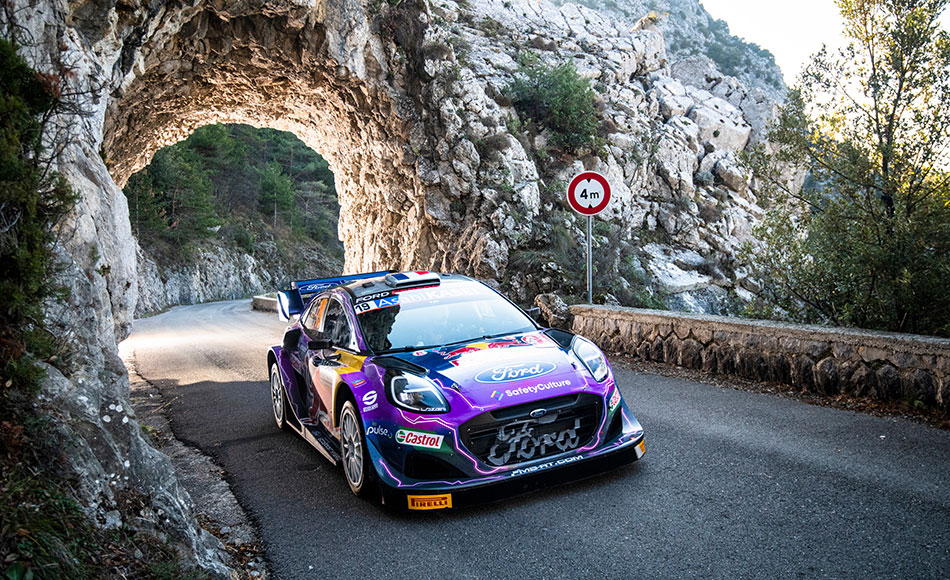 Loeb had a dream opening loop of the day as he won all three stages in the morning. The Frenchman hailed the new Puma Rally1 car and was able to push hard with it: “I was pushing really hard all morning and the car is great. I have a very good feeling with this car, so I continue to push.”

Sébastien Ogier and Elfyn Evans both had a scary moment in the opening stages of the day. The drivers commented that the grip was difficult to judge. The Toyota teammates both hit an armco barrier in right handers but managed to continue without loosing a lot of time.

Adrien Fourmaux crashed heavily in SS3. The Frenchman was running fastest in the opening splits of the stage but misjudged the grip in a left-right combination which meant he went too fast into the left hander and clipped the wall on the right hand side. Fourmaux’s Ford Puma was heavily damaged and won’t re-start under Super Rally regulations.

After the lunch break, Loeb continued where he left off before lunch: winning the stage, meaning that he had now won all four stages today. In the new stage however, the M-Sport driver had problems with the hybrid-system which meant he didn’t have any electric power in the stage.

Loeb was third fastest in the stage and lost 1.4 seconds to Ogier. Gus Greensmith took his first-ever WRC stage win. The Brit was on his way to the next stage when he realised that he had won his first WRC stage. “Yes! Come on!”, screemed an enthused Greensmith.

Ogier took the stage win the final stage of the day by 1.5 seconds over Hyundai’s Thierry Neuville. Loeb dropped 4.5s to Ogier and leads the rally at the end of the day by 9.9 seconds. Evans was close to Ogier all day but lost 11.3s in the final stage. The Welshman was surprised by this: “I’m surprised to lose quite that much. We were probably too careful on the hairpins here towards the end, but I didn’t expect to lose that much.”, he said. Evans ends the day 22 seconds of the lead, and 12.1 second behind Ogier.

Hyundai driver Neuville and Ott Tänak are fourth and fifth respectively. Both driver started to get a better feeling with the i20 N Rally1 but are 47.8 and 56.7 seconds off the lead respectively. M-Sport’s Craig Breen is sixth overnight ahead of his teammate Greensmith. Breen emphasised several times during the day that there is a lot of potential in the Puma, but that he is yet to find push to the limits of the car.

Takamoto Katsuta is eighth overall, just under half a minute behind Greensmith. Kalle Rovanperä improved “all the time” today but was described the day as “not good”. The Finn is ninth, 36.9s behind Katsuta. Oliver Solberg rounds off the top ten, 10.1 seconds adrift of Rovanperä.

In WRC2, it’s Stéphane Lefebvre who ends the day on top. The Frenchman has a 1.4s advantage over Andreas Mikkelsen. Last year’s WRC3 champion, Yohan Rossel is third, 19.1 seconds off Lefebvre.