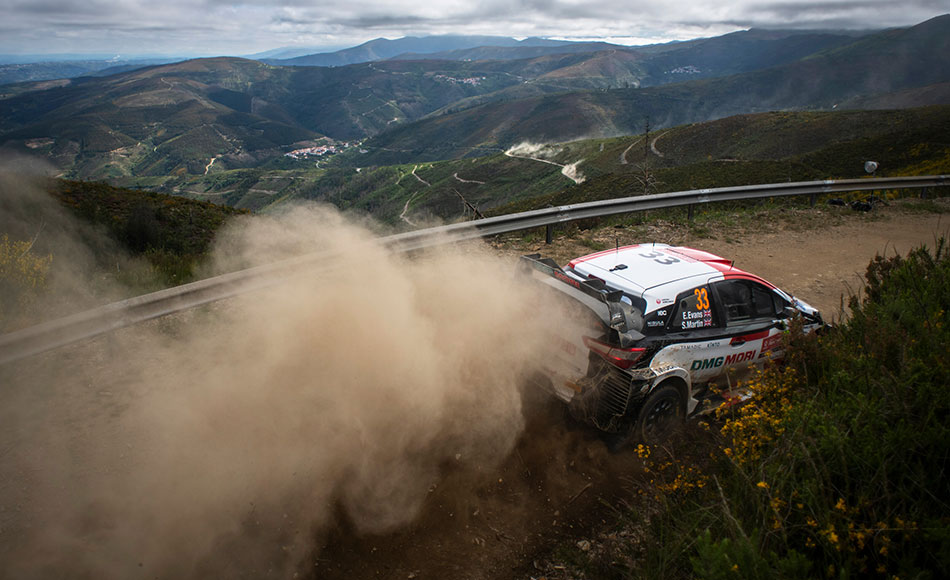 Elfyn Evans has won Rally de Portugal 2021 ahead of Hyundai’s Dani Sordo. Evans inhereted the lead after late drama for Ott Tänak on Saturday afternoon and dominated on Sunday to win the rally.

Evans was on a mission in the first stage of the day. The Toyota driver won SS16 by 8.9 seconds over Adrien Fourmaux. Sordo dropped 9.6 seconds in the opening stage and saw the gap with Evans almost double to 20.3 seconds.

In SS17, Evans won the stage again. This time by 1.4 seconds over Dani Sordo which increased the gap to 21.7 seconds in the overall standings.

Thierry Neuville, Ott Tänak and Kalle Rovanperä all restarted today after retiring yesterday. The restarters had to open the road this morning and saved their tyres for the Power Stage. Neuville did win SS18, the first pass through Fafe, which is the Power Stage. Evans lost 6.7 seconds to Neuville, but increased his gap to Sordo by 3 tenths of a second to 22 seconds overall with two stages to go.

Evans set another fastest stage time in the penultimate stage of the rally. Adrien Fourmaux was second fastest through, 4 seconds slower than Evans. Dani Sordo set the third fastest time in SS19, 4.2 second down on Evans. With only the Power Stage to go, Evans increased his lead to a healthy 26.2 seconds.

Hyundai’s fly in the Power Stage

More important for Evans was his rally win. The Welshman won the rally by 28.3 seconds at the end. It’s the fourth WRC-win of Evans’ career. Dani Sordo and Sébastien Ogier complete the podium. Ogier keeps his championship lead as the seven-time champion took 2 points more than Evans in the Power Stage. Thierry Neuville drops to third in the championship standings, 22 points behind Ogier. Full championship standings below.

Next up on the WRC calendar is Rally Italia Sardegna in two weeks time from 03 – 06 June!

WRC Drivers’ Championship standings 2021 after Round 4

WRC Manufacturers’ Championship standings after Round 4