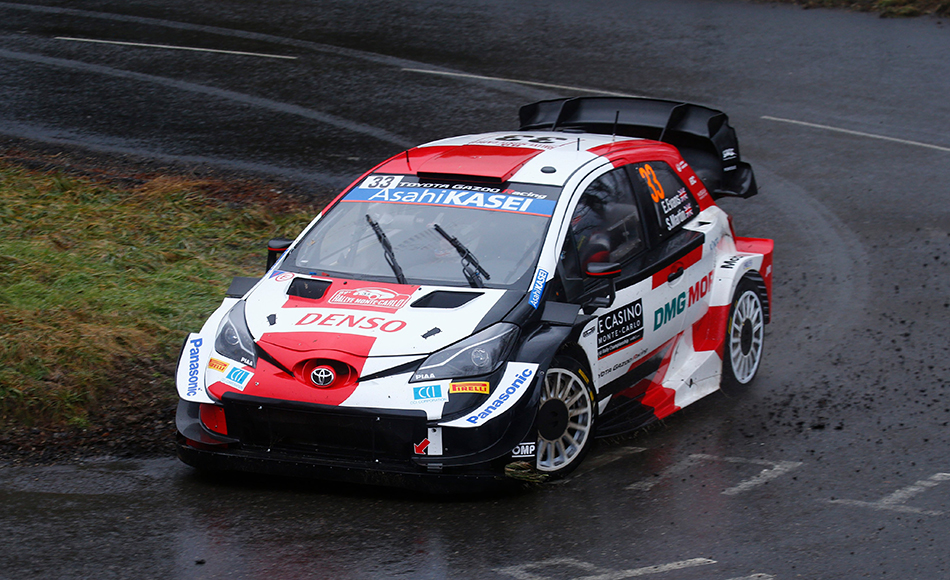 Toyota driver Elfyn Evans leads the Rallye Monte Carlo after Friday’s stages. The Welshman has a 7.4 second advantage over his team-mate Sébastien Ogier going into Saturday.

Ogier won all three stages this morning and was leading the rally at mid-day service by 11.3 seconds. However, in the first stage of the afternoon, Ogier got a puncture and lost 34.7 seconds to Evans who adopted the lead.

Ogier was flying in the final stage (SS7). In very wet conditions, the Frenchman posted a stage time of 14:09.8, going fastest for the fourth time today. Evans dropped 16 seconds to Ogier in SS7, which means that last year’s championship runner up is the overnight leader by 7.4 seconds.

Ott Tänak is third overall after today’s stages. The Estonian was struggling with problems through the day saying: “We are having some kinds of surprises and I am not very happy with that.”

Kalle Rovanperä, who started the day in second overall, is fourth after SS7. The young Finn was leading the rally after the opening stage today, but got a 10 second time penalty for being late at TC. Rovanperä then made a mistake in SS6 which he explained as a stupid: “There was a really muddy cut and I lost the car – we went in a field and we had to reverse out which took a lot of time. A stupid mistake.”

Thierry Neuville is fifth overnight. The Belgian struggled in the morning with a wrong tyre choice and spun in SS5. The afternoon went better for Neuville who complimented his new co-driver Martijn Wydaeghe at the end of the day: “Martijn did an incredible job and I was more confident as well. It will be tricky for us to catch back the time we lost this morning, but I tried to have a clean stage and it worked quite well.”

Dani Sordo is P6 overnight. The Spaniard was struggling with his confince in the Hyundai. Looking at the standings, Sordo is in no man’s land. He’s 50.5 seconds behind Neuville and more than 2 minutes ahead of Andreas Mikkelsen, who is the fastest Rally2-car of the field in P7 overall.

Takamoto Katsuta moved himself up into P8 overall. The Japanese driver posted impressive stage times in SS6 and SS7 (P4 and P5 respectively).

M-Sport driver Adrien Fourmaux is ninth overall after SS7. Fourmaux is 47.1 seconds behind his WRC2-rival Mikkelsen. The top 10 is concluded by Gus Greensmith in his Ford Fiesta WRC.

Pierre-Louis Loubet crashed out in the final stage of the day. The Frenchman locked up in his Hyundai, went straight on and hit a rock.