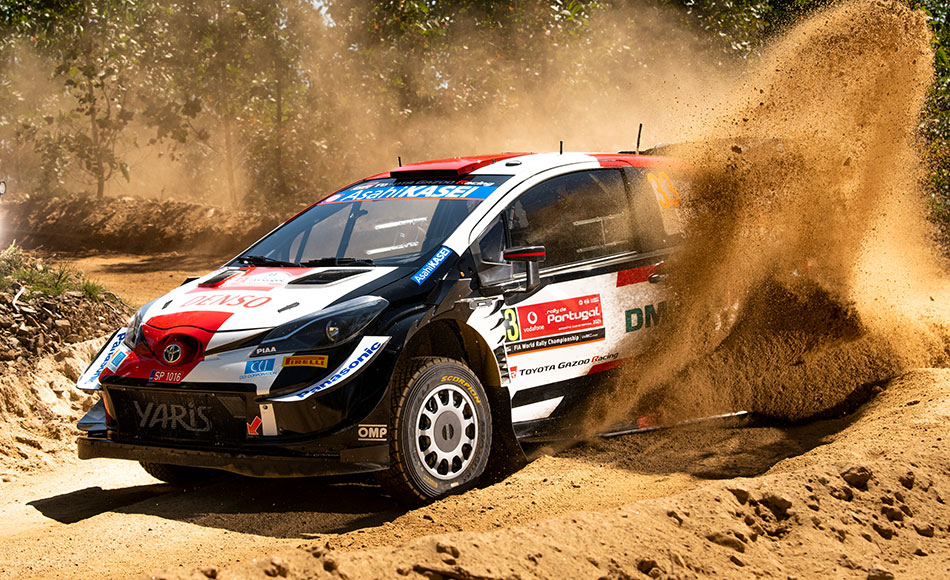 Elfyn Evans leads Rally Portugal going into the final day by 10.7 seconds over Hyundai’s Dani Sordo. Ott Tänak, who dominated on Saturday morning, had to retire in the penultimate stage of the day after damaging the rear-right suspension of his car.

Tänak had a dream morning loop to start the day. The 2019 World Champion won SS9, SS10 and SS11 to increase his lead to 19.2 seconds at mid-day service. Elfyn Evans managed to nab a stage win from Tänak in the first stage of the afternoon loop by just 0.6s.

In SS13, Tänak set the fastest time for the fourth time of the day, it was the Estonian’s 250th stage win in his career. Evans and Sordo couldn’t match Tänak pace and dropped 3.8 and 4.7 seconds respectively.

Disaster struck for Tänak in the second part of SS14 as the Hyundai driver damaged the rear-right suspension of his car. Once the wheel started to move around in the wheel arch, Tänak eventually had to stop and retire for the day.

Kalle Rovanperä set a second fastest time through SS13 but returned to service before the start of SS14. Toyota confirmed Rovanperä’s car had a technical issue and thus had to retire for the day. Thierry Neuville had a day to forget. The Belgian completed the morning loop but also had a problem with his car. Hyundai decided to retire Neuville’s car for the second time this weekend and hopes to return tomorrow for the Power Stage.

Gus Greensmith suffered a throttle paddle issue with his Ford Fiesta WRC and lost lots of time in SS13 and SS14. Despite the issue, the young Brit sits P6 overnight, 6.4 seconds behind his team-mate Adrien Fourmaux.

Dani Sordo won the final stage of the day in Porto. The Spaniard’s time was 5.7 seconds faster than Evans despite the stage being only 3.3 kilometres long. It means that Evans has a 10.7 second advantage with one day to go at Rally de Portugal. Ogier is third overall, more than a minute behind Evans and 1.5 seconds ahead of Katsuta. Adrien Fourmaux is fifth overall overnight with his M-Sport team-mate Gus Greensmith in P6. WRC2 leader Esapekka Lappi is seventh overall, followed by Teemu Suninen in P8. Mads Østberg and Nikolay Gryazin round off the top 10. Oliver Solberg had a spin in SS14 but only sits 3.1 seconds behind Gryazin in the overall standings.