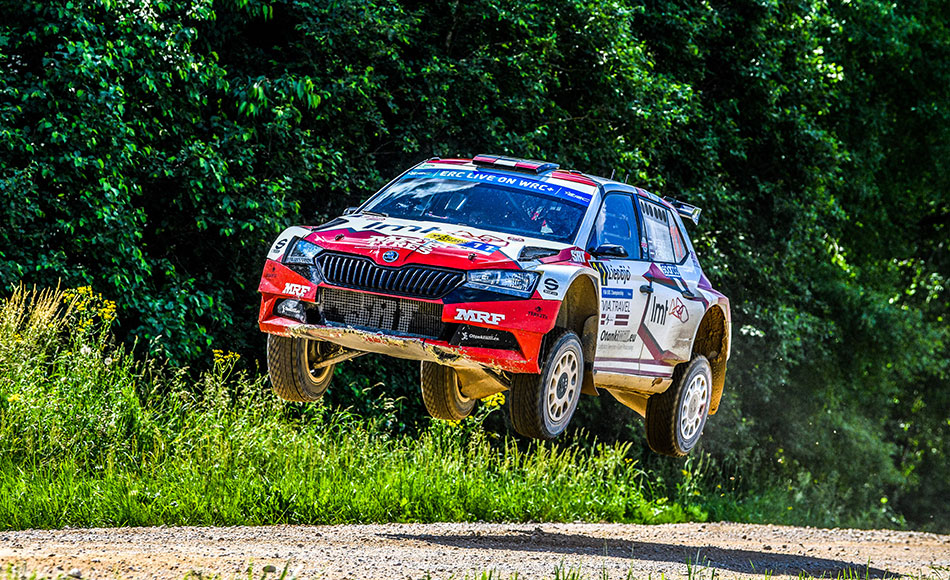 The hometown hero stepped up from ERC Open to the ERC’s main category for the FIA European Rally Championship’s fifth round and led from start to finish in a Team MRF Tyres Škoda Fabia Rally2.

Armed with a brand-new tyre from the Indian rubber giant, Sesks was in a league of his own and carried a 22.9sec lead into the final leg after winning all six of Saturday’s superfast speed tests.

He showed no intentions of letting off on Sunday, either. Another flawless performance earned the 22-year-old a clean sweep of fastest times and he arrived back at the finish in Liepāja city centre 1min 10.9sec clear of team-mate Efrén Llarena.

Sesks’ result wasn’t just impressive – it was history-making. He became the first-ever driver to win every stage of an ERC rally.

“This is just pure joy,” beamed the winner. “It feels so incredible.

“I had this opportunity thanks to Team MRF Tyres and Sports Racing Technologies and it was such a fantastic weekend. I think it’s my best rally yet,” he added.

Llarena stole the runner-up spot from fellow Fabia man Mikko Heikkilä in the Power Stage, ending just 0.7sec ahead of the Finn to complete MRF’s 1-2.

The Spaniard also made a major gain in his title chase and stretched his championship lead to 46 points over Hyundai i20 N Rally2 rival Nil Solans, who ended 12th overall after two punctures.

Solans’ i20 colleague Tom Kristensson was also involved in the podium battle before he plummeted down the leaderboard following a wheel change on SS9.

Ken Torn brought his Ford Fiesta Rally2 home 1min 31.2sec adrift of the leaders in fourth and enjoyed his own scrap with fellow Estonian Gregor Jeets, who ended just 8.0sec behind in a Fabia.

Hayden Paddon was sixth overall at the end of a trying weekend. The New Zealander took delivery of his Hyundai days before the rally and the weekend was spent trying out different set-ups ahead of WRC Rally Estonia later this month. Despite some hairy moments, he only missed out on a top-five finish by 6.3sec.

The championship reverts to asphalt later this month for Rally di Roma Capitale. The sixth round takes place from 23 – 24 July.

Championship standings (after round 5 of 8):