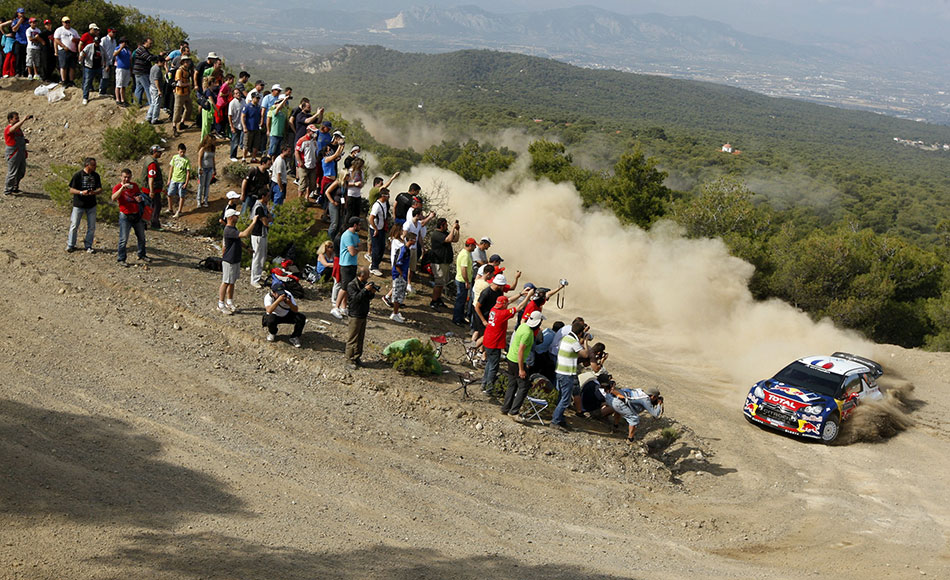 A classic rally with the reputation as one of the toughest to ever be featured in the championship returns this week for the first time since 2013. Here’s your quick preview for WRC Acropolis Rally Greece.

The ‘Rally of Gods’, which used to run around May and June, is expected to be a little less tougher in September as the temperatures are not as high in May/June. Drivers experienced rain, fog and mud during recce this week which led to Wales Rally GB-style pictures (picture below) from the stages.

Forecasts are looking better compared to the conditions during recce with temperatures and sun expected to replace the rain and clouds. However, it remains to be seen whether if and how it will affect the stages.

Action kicks off on Thursday morning with a 4.25 km long Shakedown just outside of Lamia as a warm-up for the rally itself, which starts on Thursday evening in the capital of Athens with a 0.98 km long Super Special Stage.

The crews stay in Athens overnight before heading to the stages around Loutraki. Loutraki is a familiar name for the Acropolis Rally, as it was the home of the service park back in 2013 when the rally was part of the WRC for the last time. Friday consists of a total of 5 stages, with ‘Thiva‘ being the longest stage of the day at 23.27 km. The stages are located far from each other, as it’s a 3 hour drive from Loutraki to Lamia. SS5 (Thiva) and SS6 (Elatia) are on the way back to Lamia and are run only once.

Saturday is the longest day of the rally with a total of 6 stages and 123.56 of competitive kilometres. Most stages with the exception of Bauxites are unknown for the drivers which could make things extra interesting. Pavliani will be run twice and is the longest stage of the day at 24.25 kilometres.

The final day of the rally only consists of 3 stages, but these 3 stages bring the daytotal to 69.25 kilometres. Tarzan will be run twice. However, the second pass through, which will be the Power Stage, starts around the mid-point of the first pass which brings the length of the Power Stage to 12.68 kilometres. A big factor for the final day will be the Pyrgos stage with its 33.2 kilometres. It’s the longest stage of the rally where differences could be made.

A total of ten WRC-cars will start this weekend’s Acropolis Rally. Toyota-driver Takamoto Katsuta was forced to withdraw this morning which reduced the total amount of World Rally Car entrants to ten.

Greek-driver Jourdan Serderidis makes his long-waited Acropolis appearance with a World Rally Car with Belgian co-driver Frédéric Miclotte alongside him in the Ford Fiesta WRC. Dani Sordo debuts with his new co-driver Cándido Carrera alongside him on the highest level this weekend.

In WRC2, Andreas Mikkelsen welcomes Gus Greensmith’s former co-driver Elliott Edmondson alongside him in the Skoda Fabia Rally2 Evo. Mikkelsen, Østberg and Bulacia weren’t competing last time out in Ypres but are back this weekend. Nikolay Gryazin switches to a Ford Fiesta Rally2 this weekend instead of the Volkswagen Polo GTI R5 but is still entered for the Movisport SRL-team.

Yohan Rossel was the only driver in the top 10 of the WRC3 who was present in Ypres and won the category against the fast Belgian drivers. However, this weekend his championship rival Kajetan Kajetanowicz is back in action. 45 points separates Rossel and Kajetanowicz, but Rossel has competed at five events this season whilst Kajetanowicz competed in four events so far.

Back to the WRC to conclude. Sébastien Ogier heads into the rally with a healthy 38 point lead over Elfyn Evans and Thierry Neuville who are joint second. Kalle Rovanperä is fourth in the championship after but is a 63 points behind Ogier and not a realistic championship contender anymore.

Find the itinerary of the rally here. Time are local, CET is -1 hour, BST is -2 hours.