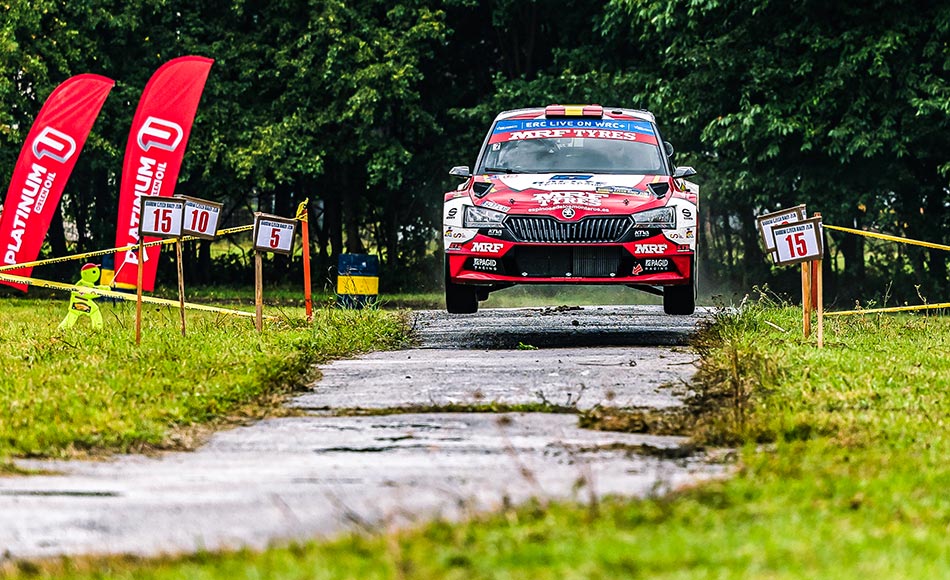 FIA European Rally Champion Efrén Llarena is ready to put on a show for his home fans at the RallyRACC Catalunya-Costa Daurada finale this week (20 – 22 October).

Llarena and co-driver Sara Fernández were crowned the champions of Europe ahead of last month’s Barum Rally, while their Team MRF Tyres squad also sealed the respective teams’ title at the Czech event.

With 14 stages totalling 235.52km, this week’s Spanish fixture is the longest of the 2022 ERC season. And, although the pressure on his shoulders is now somewhat lighter, Škoda Fabia Rally2 star Llarena is keen to extract the maximum from his lap of honour in front of local crowds.

“I am feeling good,” said the Spaniard. “Let’s see what we can do in this rally. I really enjoy these types of stages, but you need to trust in your pace notes and follow the lines.

“Yes, it’s my home rally, but I have only done it once before in 2018 and we retired after the first stage. It’s kind of like my first time here, but I think we can do a good job.”

Adding a spice of variety to the entry list is Yoann Bonato’s Citroën C3 Rally2, with the asphalt specialist out to challenge for his third podium – or maiden victory – of the season.

While several titles have already been confirmed, a number of support category awards still remain up for grabs and will be decided in the Costa Daurada hills this week.

Three drivers head to Salou in contention for the ERC4 championship, which is open to competitors of any age in Rally4 or Rally5 cars.

Óscar Palomo’s Peugeot 208 sits comfortably at the top of the standings with a 14-point advantage over Renault Clio man Andrea Mabellini. Laurent Pellier, who secured the Junior ERC title last time out in his Opel Corsa, is a further six points adrift.

Also to be decided is the ERC Open championship, a series ​​for Rally2 kit, RGT and Group N4 cars. Suzuki Motor Ibérica team-mates Joan Vinyes and Alberto Monarri will go head-to-head for the spoils in their identical Swift R4LLY S cars.